Danyelle Wolf is no doubt one of the more unique fighters to enter Dana White’s Contender Series in its four seasons on the air. She’s also one of the more interesting boxing-to-MMA crossover stories.

The 37 year old is a championship level boxer, and a three-time USA Boxing National Championships champ at welterweight. An Olympic hopeful in 2016, her entire career in the sport was in the amateur ranks, to allow for that Olympic opportunity.

Now, she’s making the late-career switch to MMA, appearing on the Contender Series on September 15. Wolf is set to take on Taneisha Tennant, and is the first 0-0 fighter to appear in the show’s history.

Wolf, of course, has had big fights before. So despite the high profile of her MMA debut, “it’s just another day at work. I’m a fighter, this is what I do,” she told Cageside Press ahead of the fight.

She has, however, noticed what the UFC platform brings with it. “It was funny, they announced my fight just for like one minute on the UFC card the other day, and just in like one minute, I gained like 1,000 followers,” she noted.

If you’re doing your homework on Wolf on sites like BoxingRec, you’ll find a record of 27-14. Forget it. “That’s not even near close,” she stated. The real number is much, much higher.  Per Wolf herself, her record between all tournaments and competitions in two weight classes overall is 64-9.

“Just in one boxing tournament on Team USA, you get five,” explains Wolf who recounts the number of fights that do not seem to be recorded anywhere on the web. “So you get four to five fights, that you’re fighting in a week. So we have to weigh in every day, or every other day,” she explained.

You lose track at 30 fights, she admitted. But all that experience created an issue when she began her transition to MMA. “That’s why it was so difficult to find amateur MMA fights. I had 16 girls back out,” Wolf said. “I wanted to get my feet wet, as they would say, and get into amateur MMA fights right away.”

The move to MMA came after her Olympic dreams were dashed. “So after I was on Team USA from 2012 to 2016, they announced they were going to add my weight class to the 2016 Olympic Games,” Wolf stated. She’d fought as a welterweight, which in boxing had her at 152lbs. Her public profile went into overdrive. She appeared in EPSN’s The Body issue, turned up at the ESPY awards, walked the red carpet alongside The Rock — only for the weight classes’ addition, for the ladies anyway, to fall through.

“It didn’t make the cut. I was crushed.” Her Olympic dream over, with a wealth of boxing experience behind her, Wolf opted to try her hand at MMA. After all, she was already sort of a “female Bo Jackson,” a jack of all trades in the sporting world. Everything from field hockey to basketball to boxing and MMA.

Which is what has her primed for success inside the octagon. “You can’t just be a boxer and go into MMA,” warned Wolf. “You have to be a boxer, and be a well-rounded athlete, and go into MMA.” Which is why Wolf feels boxing champ Claressa Shields‘ claims of coming into MMA and taking over are “absolute bull crap.”

“You have to have respect for the sport of MMA, and you have to respect that it is not just striking,” opined Wolf. “If you come into MMA as just a boxer, you’re going to get your leg kicked out if you don’t know how to react to kicking. You are going to throw your jabs or whatever, and be immediately taken down in wrestling.”

“You can’t just be a great boxer, because you will get taken down by great wrestlers, and you will get your leg kicked out by great kickboxers, she continued. “So you have to be a well-rounded athlete, you have to respect the sport, you have to put in the work as a mixed martial artist, and as a student. That’s what I think I did really well in the past couple years now that I’ve been doing MMA. I’m really excited to see how I put it all together.”

The elephant in the room, mind you, is that Wolf is trying to fight her way into a weight class that is on the brink of extinction, at least in the UFC. Women’s featherweight is a barren landscape, with just two established fighters, Megan Anderson and Felicia Spencer, outside of double-champ Amanda Nunes.

There’s a feeling that, if Nunes defeats Anderson later this year, or opts to leave the division or retire, it could go the way of the T-Rex.

What featherweight needs is some personality. “I think it’s important to not just be a champion and win belts and just go on with your daily lifestyle, but to win belts, and be inspiring and be motivating, and create an empire,” said Wolf. So no, she reiterated, “I don’t think [featherweight is] going anywhere, I just think we need more athletes that are motivating, and encouraging, and positive, and they put on a show inside and outside the octagon. I think that’s very important.”

Of course, if the UFC dropped the division, there’s still Invicta FC, Bellator, and others that are out there. Wolf was also previously linked to LFA at one point. That’s not on her mind apparently. “I’m all about being with the biggest and the best show,” Wolf said. “We’re going to do the Contender Series, and see where it goes.”

And if she does make the UFC, Wolf believes she’s ready for the top. “The Wolf vs. The Lion. Sounds great. I’m ready.” 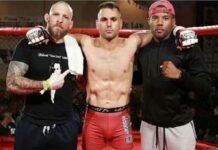