Two-division UFC titan Amanda Nunes will look for the second defense of her featherweight title when she meets Megan Anderson at UFC 256.

Per Brett Okamoto of ESPN, two-division UFC champion Amanda Nunes will be returning at UFC 256 in December to defend her featherweight title. That will come against surging Australian contender Megan Anderson.  No exact date or location for the bout has been announced.

Amanda “The Lioness” Nunes is currently on a win streak that has many proclaiming her as the greatest female mixed martial artist of all time. With a further argument to be made that she is among the best pound-for-pound, male or female, fighters today.  Most recently, she defended her featherweight title in June with a blistering performance against Canadian prospect Felicia Spencer.  A victory in December would be her second title defense at featherweight, adding to the five defenses she already has at bantamweight.

Megan Anderson is a former Invicta FC champion who entered the UFC in 2018 as the top contender in the freshly launched featherweight division.  After stumbling early in the promotion and going 1-2, Anderson put together back-to-back knockouts with stoppages of Norma Dumont and Zarah Fairn Dos Santos.  With Nunes having already dispatched former champion Holly Holm at bantamweight, many pointed toward Anderson getting the next shot at Nunes and keeping the champion at 145 pounds for the time being.

No exact date and location for the bout has been decided, though it is expected to take place in either Las Vegas or Abu Dhabi, two locations the UFC has held events for the past several months. 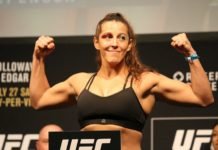