At UFC Busan back in December, having gone three rounds with Volkan Oezdemir, the light heavyweight was flabbergasted to hear two judges awarding the fight to his opponent. Only one sided with the Austrian, snapping a 12-fight win streak.

It didn’t seem to hurt his fortunes much, mine you. Just a few short months later, Rakic signed a new deal with the promotion. This weekend, he’s fighting an opponent ranked higher than the man he lost to, Oezdemir. Another former title challenger, as Smith fought Jon Jones for the belt at UFC 235.

In his mind, there’s no question about how that fight should have gone. “Absolutely. I won that fight. Even the UFC knows I won that fight,” Rakic told Cageside Press at Wednesday’s UFC Vegas 8 media day.

“They gave me, after that fight, Anthony Smith, an even better ranked opponent than Volkan,” he pointed out. “I’m fighting in Las Vegas, I’m now the main event. I won that fight clearly. I never felt like a loser one second.”

It’s an interesting time for the light heavyweight. A three-round main event, care of Zabit Magomedsharipov vs. Yair Rodriguez falling through once again. Ahead of a title fight to crown a new 205lb champion — the first light heavyweight champion to not be named Jon Jones or Daniel Cormier since 2011.

All the more reason to put on a big show this weekend. There’s so much more on the line. At the same time, however, Rakic noted that “I don’t want to put any more pressure on my shoulders. My job is to go in Saturday and to make a statement, to make a great performance.”

Thankfully, after one early hiccup, he’s in Vegas and able to focus on just that. For a brief moment, it seemed like that might be an issue.

“Basically we were supposed to arrive on Friday last week. We couldn’t, they didn’t let us. The airline told us we cannot enter the U.S.,” he revealed during media day on Wednesday. “One day later, the UFC sent some papers over, and it was not a problem. We got cleared, we came on Saturday, it was not a problem at all.”

Now, it’s on to his fight with “Lionheart.” While some might be overlooking Anthony Smith after his performance against Glover Teixeira earlier this year, Rakic is not among them.

“Everybody watched the last fight of Anthony, everybody thinks he’s done, he took a beating,” observed Rakic. “This was just a fight, you know?”

“His previous fight was pretty good,” he opined. “I respect him as a fighter, he’s very experienced, tough, and it’s a great challenge for me. And I love challenges. This motivates me. To fight a better ranked opponent, to be able to beat a top five in the world on Saturday, this motivates me like hell.” 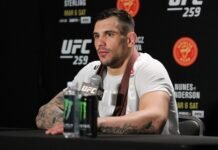 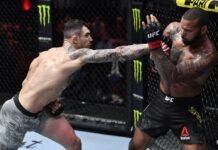