Following the UFC’s latest offering at the Apex in Vegas, the NSAC has handed down their usual medical suspensions. Somewhat surprising was that the largest of the thirteen layoffs was attached to the name of a winning fighter.

After one of the biggest upsets in UFC history, Shana Dobson was given a 180 day suspension for injuries sustained during the fight. In just under seven minutes of cage time, Shana picked up an injury to her ribs before stopping Mariya Agapova with ground and pound strikes. As a result, she’ll have to wait a while before she can build on her first win in nearly three years. She can, of course, be cleared early by a clean x ray on the left side of her ribs.

Despite some absolutely grueling fights, there were no other major injuries. Other noteworthy issues include a pair of cuts to Mizuki Inoue and Matthew Semelsberger. Both of those cuts were close enough to their eyes to warrant the commission to implore them to seek doctor’s clearance for those injuries. 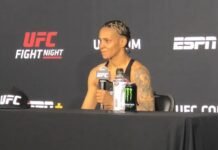