“Senor Perfecto” is set to make his UFC debut this weekend, in an extraordinarily high profile match-up for a newcomer. That will see Bill Algeo (the aforementioned “Perfecto”) taking on Ricardo Lamas, as he steps in to take the place of Ryan Hall.

Algeo (13-4) fought just weeks ago, picking up a unanimous decision win over Tim Dooling at CFFC 83. “That fight went pretty well for me, so I think it’s definitely going to aid in this coming fight,” he told Cageside Press during the UFC Vegas 8 media day.

One added benefit has been a less strenuous weight cut. Which Algeo said “is actually pretty easy, because I am pretty light from the last fight. So that was a nice surprise.”

Debuting fighters don’t normally get opponents as well-known as Lamas, but with an uptick of short-notice fights during the coronavirus pandemic, here we are. “It’s been quite a week. I found out less than a week ago, and I couldn’t be happier,” Algeo said of the booking. “It’s a great fight for me, and I’m ready to show a lot of people what I can do.”

Algeo, whose “Senor Perfecto” nickname started with a Youtube video and is a spin on Mr. Perfect that honors his wife’s Puerto Rican heritage, appeared on Dana White’s Contender Series last year, suffering a loss to Brendan Loughnane. He was actually able to regroup from that defeat during the pandemic, building to his CFFC win and UFC debut.

“Any time you lose, you have to refocus on what you need to get better at,” noted Algeo. So that’s what he did, training solo at his own gym during the pandemic, since he was paying rent on it anyway. “It was nice not being bothered by anybody.”

Which brings him to his UFC dream, a goal over a decade in the making. A win “would mean everything. It’s been a goal of thirteen years for me, and it all happened in a short amount of time. I couldn’t be happier.” 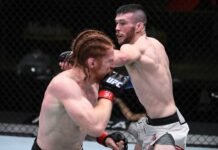 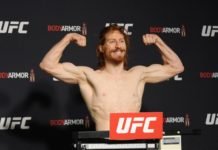