In a rather odd twist of fate, Herrig’s last two fights, both losses, were overshadowed by one Conor McGregor. The Irish star headlined against Khabib Nurmagomedov at UFC 229, where Herrig lost a unanimous decision against Michelle Waterson. One fight prior, she’d been at UFC 223 — losing a split decision to Karolina Kowalkiewicz just days after McGregor and some associates stormed a parking garage at the Barclay’s Center in Brooklyn, in an attack on rival Nurmagomedov.

There would be no McGregor involved in UFC 252. Just a rather daunting opponent in former Invicta FC champ Virna Jandiroba. And Herrig, returning from a knee injury, on top of all that.

Jandiroba immediately landed a takedown off the opening bell, putting Herrig on her back. Felice threw a few punches from bottom while her opponent worked, threatening to take the back. Jandiroba trapped a leg, and to prevent the Brazilian from taking her back “Lil Bulldog” gave up mount. Before long, Jandiroba had an arm-bar in. Herrig freed the limb, but Jandiroba latched on with the submission again. Dry, with the arm trapped, she had it, and Herrig knew it. That tap came, spoiling Herrig’s return.

Virna Jandiroba, meanwhile, had her second straight win inside the octagon. Putting the strawweight division on notice. 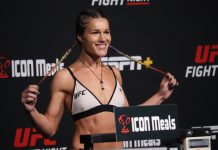 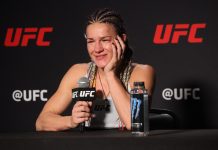