The UFC’s very own Iron Man, Jim Miller, was making the trip to the octagon for the 36th time at UFC 252. To put things in perspective, Miller joined the UFC way back at UFC 89. He’d fought at UFC 100, UFC 200, and countless cards in-between and since. Saturday, he was paired up with Vinc Pichel, a fighter who was essentially the opposite of Miller, in terms of activity.

A host of injuries over the years had limited Pichel, who joined the UFC in 2012, to just seven fights in the octagon. Saturday would be number eight, his first of 2020. Off hip surgery during his most recent stretch of time off.

The pair served as the featured preliminary fight of UFC 252. They were well worth it.

Pichel immediately landed with a right hand that caught Miller’s attention. Miller fired back with a left moments later. Both men had their hands going; Miller had his kicks firing as well, but off a combo he landed low, halting the action. When the action resumed, Pichel connected with a knee, while Miller looked to tie things up and presumably get the fight down.

On the ground, of course, would be where Miller had the biggest advantage. But while Miller was able to land some knees and elbows in the clinch, he could not take Pichel down. At least not until later, when Miller caught a kick and dumped his opponent, quickly taking the back. In cramped quarters, Miller couldn’t finish the rear-naked choke, switched to a guillotine, then finished the round working on a calf slicer.

Safe to say, Vinc Pichel would be looking to avoid the ground in round two. That didn’t happen. Within seconds, Pichel was on his back, Miller in his guard. Pichel would make it back to the fence and back to his feet, but in a clinch, Miller went for the guillotine. Pichel slipped free however, which at least left him in a dominant position, but Miller began hunting for an omoplata. Then a knee bar. Pichel’s brute strength kept him out of trouble, but he was spending as much time defending submissions as he was scoring damage. As the round closed out, however, Pichel was finally able to land some heavy shots.

Just ate it 🍽@JimMiller_155 was absolutely unfazed by Pichel's headkick.

In the third, it was Vinc Pichel’s turn to work on his submission game. Working on top, he kneed the body, looked to trap an arm, and seemed to be in the driver’s seat. Miller tried for a leg lock but gave up his back before freeing himself. Back on the feet Miller again hunted for a guillotine, which took them back down. This time Miller worked from the back, trapping Pichel’s leg. In a scramble, Miller rolled into a bad spot, nearly giving up his back, but he escaped, moving back to a clinch only to eat a knee. Then another off the break. Pichel then moved in for a single leg takedown. Unable to land it, he fired yet another knee, then a hard high kick. Miller then jumped on a guillotine, squeezing with all his might until Pichel was able to slip out. That allowed Pichel to finish strong with some ground n’ pound.

With the judges siding with Vinc Pichel, he picked up what is unquestionably the biggest win of his career at UFC 252. 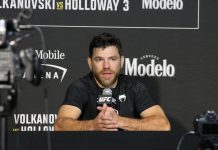 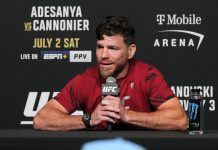