Mike Rodriguez sprung onto the UFC’s radar with an impressive first round flying knee victory on Dana White’s Contender Series in 2017. One of many to impress their way to a contract, Rodriguez is now four fights into his UFC career. Coming off a loss Da Un Jong in South Korea, Rodriguez is set to return versus Marcin Prachnio at the UFC Apex on August 22.

We caught up with Rodriguez recently, who admits it can be difficult to prepare for an inactive fighter like Prachnio.

“It is difficult, he’s been out for two years” Rodriguez told Cageside Press. A ONE Championship veteran who entered the UFC on an eight-fight win streak, Prachnio last competed in September 2018.

Prachnio’s last appearance saw him fall to Magomed Ankalaev via stoppage. That put Prachnio, formerly undefeated in ONE Championship, at 0-2 in the UFC. Rodriguez himself has not competed since December of 2019 as COVID-19 has taken its toll on the world as a whole. Rodriguez was more than excited to get the call after the months of quarantine. He had high praise for the UFC president, Dana White.

“I was pumped, there was so much uncertainty for so long but Dana got us back and now I’m one of those [returning fighters],” Rodriguez explained. “The roster had a big Zoom meeting with Dana, he told us we were going to be back up and running. I was rejuvenated, we are lucky to have Dana White. If he likes the odds he will jump all over it, I knew we’d be the first sport back.”

As has become common for nearly every fighter that has competed during these last few months, training camp has changed drastically. Rodriguez is a long time member of the well-known Lauzon MMA, in Bridgewater Massachusetts. Headed by longtime UFC legend Joe Lauzon, the gym has become a headquarters for the best New England has to offer.

“Joe [Lauzon] has been doing his thing. It has been a different training camp that’s for sure” Rodriguez told Cageside Press. “Lot of outdoor classes, smaller circles and more creative for training camps but we are getting it done as usual.”

Rodriguez is one of many New England products that have found themselves in the UFC of late, competing with the best in the world. And rightfully so. He’s a former mainstay in the Rhode Island promotion CES MMA, which has become a feeding ground for top promotions like the UFC and Bellator. Rodriguez has nothing but praise for the New England scene, and his former home in CES.

“New England MMA has unity, we are a family” Rodriguez stated. “Everyone used to fight each other, now it’s, all of us fight the other parts of the country or world. We all train together from all over the place. Lauzon’s is the center, he runs a community feel. CES is a feeding ground too. CES promoted me, pushed me to the big stage, they support their fighters and push them to that next step.”

It is clear the New England MMA scene has never been stronger or prouder of their unity and backgrounds. As for fight night, Rodriguez predicts he will finish Marcin Prachnio at the Apex. Rodriguez also admits to still having trouble when it comes to pronouncing the last name of his opponent.

“I feel bad, I butcher his name, I do feel bad,” Rodriguez laughed as he attempted the last name. “I will finish him. I will beat him. I don’t have any crazy prediction but I am going to be on the winning side, I’m very prepared.”

As a fellow Boston native, I couldn’t help myself in asking Rodriguez what team and sport he was most excited to see return now that the rest of the sporting world has begun to open up. With the Boston Bruins in the top seed in the NHL, the Celtics in prime position, and the Red Sox returning to play there are plenty of options.

“Hockey man, you know there is nothing like playoff hockey” Rodriguez exclaimed. “It is unreal to watch, so I’ll be watching the Bruins the closest.”

Mike Rodriguez is set to return to the octagon against Marcin Prachnio on August 22 at the UFC Apex in Las Vegas, Nevada. 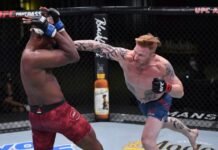 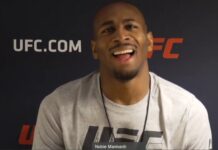