A pair of longtime UFC heavyweights will face off this Fall when “Big” Ben Rothwell takes on Marcin Tybura.

The veteran duo will meet on October 10, at event which has not yet been announced. No official name/designation or location have been revealed for the card. MMA Fighting was first to report news of the booking.

Both men have found success in the octagon recently. Rothwell (38-12) has put together a two-fight win streak thanks to a split decision win over Ovince St. Preux at UFC Jacksonville back in May. That, combined with a victory over Stefan Struve back in December at UFC on ESPN 7, has helped put a three-fight skid from 2016 to 2019 behind Rothwell.

Tybura (19-6) has also put together a two fight win streak. His most recent victory came against the debuting Maxim Grishin at UFC 251 last month. Prior to that, Tybura had picked up a win over Sergey Spivak.

Neither man is currently ranked in the UFC’s often-criticized official rankings, but that could change with a statement victory in this match-up.

Rodolfo Vieira vs. Markus Perez is also expected to feature on the UFC’s October 10 card, per an additional report by MMA Fighting. Perez (12-3) was supposed to fight this past weekend against Erik Spicely. But with Spicely being pulled from the card on weigh-in day, Perez was left without a fight after a plan to replace Spicely with Charles Ontiveros fell through.

Vieira (7-0), a highly decorated jiu-jitsu competitor, has won both his UFC bouts to date. Most recently, he defeated Saparbek Safarov at UFC 248 back in March. All seven of his pro fights have been won via stoppage, with six of the seven coming via submission. 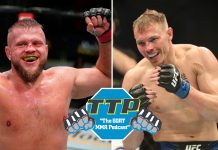