Despite a plethora of short notice fighters at UFC Vegas 5, it was actually Jonathan Martinez, part of the featured preliminary bout, who missed weight for the show.

Martinez, who previously fought at flyweight, missed the mark by a full 4.5lbs and coughed up 30% of his purse as a result. Both fighters, meanwhile, were looking for redemption in the cage, as Frankie Saenz entered off a loss to Marlon Vera, while Martinez had most recently been defeated by Andre Ewell.

Both men came out the gates throwing everything they had – Martinez with some hard high kick attempts and Saenz ripping overhand rights. Less than a minute in and Saenz used his shots as an entry to a takedown, which appears to have been the plan all along. After returning to the feet, we saw more of the same back and forth with Martinez landing more strikes, the vast majority of which are different kicks. He deterred a pair of Saenz takedowns with knees and the round finished with Martinez looking comfortable.

More high kicks from Martinez to start round two. Saenz countered with some attempts to grapple, including a catch of a kick that nearly leads them to the mat. Martinez landed a big head kick that seemed to shake Saenz. Shortly thereafter, he dropped Saenz and attempted to follow up for the finish. Saenz cleared his head and kicked the hips to return to his feet, but Martinez just went back to work there. He closed out the round with another head kick that floored Saenz, prompting a warning from the referee just before the bell saved Saenz.

Saenz answered the bell for round three and instantly was the recipient of the major theme of the night – a groin strike. After taking a second to recover, they restarted. Saenz got impatient with the striking and ate a knee on the way in. His body went limp and Martinez finished with some perfunctory strikes. 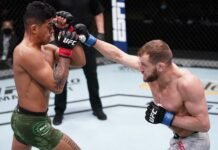 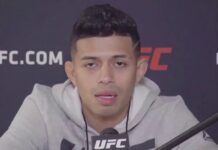 UFC Vegas 21: Jonathan Martinez Looking to Be Ranked in 2021 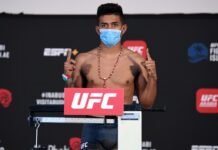