It wasn’t easy, but Nathan Maness won in his promotional debut against Johnny Munoz at UFC Vegas 5, defending a lot of takedowns along the way.

Johnny Munoz vs. Nathan Maness at UFC Vegas 5 was a battle of newcomers that had started as a fight putting the spotlight on Ray Borg.

After falling to Ricky Simon in May, Borg was looking to make his third trip to the octagon this year, something nearly unheard of in his troubled UFC career. Instead, he was out of his second fight of 2020, withdrawing from the event Friday for undisclosed reasons.

Original opponent Maness was give a new name with little more than 24 hours to go, with Johnny Munoz stepping up. For his part, Munoz was a perfect 10-0 heading into the fight, having most recently competed for KOTC. In fact, he’d competed exclusively for them.

Nathan Maness was lively with his combinations to start the fight, but got his first true connection at the one minute mark with a stiff jab. Johnny Munoz forced the clinch, then kneed Maness below the belt. Action paused for a moment, then once it resumed, Munoz connected with a kick below the belt for a second time. The referee didn’t take a point and Munoz went back into the clinch after landing a kick to the body. After a couple of efforts, Munoz was able to drag Maness down and quickly passed to side control. Munoz began looking for the kimura, stepping over the face of Maness. He quickly let go of the submission, delivering hammerfists and taking the back of Maness. Munoz peppered Maness with ground and pound to ride out the round.

Maness looked solid to start the second round, stuffing a pair of takedowns. Munoz turned it into a clinch against the cage, but that did not last. Munoz was persistent with the clinch, but Maness got a sneaky shot in that cut Munoz’s forehead. Munoz continued to press forward and picked up Maness, slamming him to the canvas and riding out the round in half guard.

A THIRD shot below the belt by Munoz started the final round and the referee finally took a point away. Munoz clinched up with Maness against the cage. Maness landed a series of body shots as Munoz held onto a body lock. Munoz wasn’t exactly pushing for a takedown and the referee separated them. Maness fired off a combination and back to the clinch we went. Again, Maness landed shots to the body as Munoz continued to hang on. He dipped down for a single leg, but Maness was the one who got a takedown. Munoz threw up his leg for a triangle, and as Maness stepped away, Munoz switched to a calf slicer. A lot of effort was exerted by Munoz, but the final bell rung. 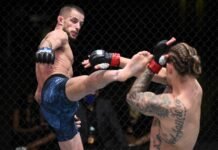