There are plenty of hot prospects around the globe in MMA. The hottest, however, will always be those who manage to compile a strong, undefeated record. Today, we’ll take a look at a trio of those, in Johnny Eblen, KB Bhullar, and Ramazan Kuramagomedov.

Fighting currently at the age of 28
Weighing in at 185 lbs
Standing at 6’1″
Hailing from Boca Raton, Florida, US
Training out of American Top Team
A professional record of 6-0 with four finishes all in the first round

Where does Eblen Excel?

Johnny Eblen finished all his pro fights before signing to Bellator in 2019 and in both of his Bellator fights he’s gone the distance. In those fights, he’s shown more of his skill set while displaying very impressive cardio, fighting at the same pace all three rounds. Eblen has a background as a Division I wrestler for the University of Missouri and he’s absolutely dominated with takedowns in MMA thus far. On the feet, Eblen bounces in and out throwing the outside leg kick well. Eblen times his shots very well grabbing the single leg and pressing his opponent against the cage then dropping levels executing the double leg.

Eblen’s hands are improving, but does more crashing forward to close the distance to work in takedowns. He is at, or at least nearly at 100% on his takedown attempts. Eblen times his shots from the outside very well and in the clinch has shown his physical strength, getting big body lock takedowns. The work he does on top has been utter dominance. His top control is heavy and he will rain down heavy and constant ground-and-pound. The work ethic here is just second to none and with his deep gas tank he’s been able to just destroy opposing fighters.

Where does Eblen need improvement?

Eblen has looked pretty darn stellar in his career. He is only 6-0 but even his last two opponents have been better competition. Despite his record, Chauncey Foxworth is a good regional test for anyone and Eblen won all three rounds. Mauricio Alonso is a BJJ black belt and someone who finished Josh Koscheck but Eblen had no issue dominating him on top. It’s clear his only need for improvement is on the feet. He’s not a distance fighter as he misses more than he lands from there, and he tends to reach with his strikes.

Bellator is known for building up prospects slowly, especially with the high-level wrestlers they’ve signed over the years. Eblen is a good talent who I think can reach title contention one day in the future. He already has the superior wrestling and top-notch cardio which is hard to find in a young guy. I’ll say I’m very confident he will reach 11-0 before facing a defeat.

Fighting currently at the age of 28
Weighing in at 185 lbs
Standing at 6’4″
Hailing from Edmonton, Alberta, Canada
Training out of Hayabusa Training Centre
A professional of 8-0 with six first-round finishes

Where does Bhullar Excel?

KB Bhullar is a well-rounded talent who is a finisher no matter where the fight is at. On the feet, he’s a fantastic distance fighter with the jab and his kickboxing. Bhullar does a great job attacking the lead leg of his opponent and then mixing it up, going up top. He’ll throw a lot of different kicks keeping his opponent on the outside, just showing different looks.

Bhullar is better at his range but in the clinch, he loves to throw knees and elbows. Being so tall, Bhullar is a nightmare in the Muay Thai plum. Not sure how good his wrestling is but he’s really tricky on the mat with his long arms and legs. Bhullar has a sneaky D’arce choke and on the mat, he is always looking for the finish. He’s technical but explosive. He’s tricky and has high fight IQ.

Where does Bhullar need improvement?

There isn’t a ton of footage on Bhullar out there but there aren’t really any glaring holes in his game. The one thing that is noticeable is he holds his hands low, but that’s because of his long frame and being confident with his distance management. It’s still a worry against a pressure striker but it hasn’t been a problem yet. Still, there needs to be a lot more seen from Bhullar.

Prior to his last fight, Bhullar hadn’t fought anyone outside of upstarts, journeymen, and fighters with losing records. With that said, in his last fight he beat former UFC veteran Matt Dwyer, which was quite the statement. I believe standing at 6’4″ at middleweight and being someone who knows how to use his range he’s going to give a lot of guys problems. I do believe before he gets to 13-0 he will be signed to the UFC. Even if he does go to the UFC I think of what all I’ve seen he’s the real deal. I’m just about sure we will see Bhullar with a 13-0 record.

Fighting currently at the age of 23
Weighing in at 185 lbs
Standing at 6’0″
Hailing from Makhachkala, Russia
Training out of Gorets
A professional of 7-0 with four finishes

Ramazan Kuramagomedov is a fighter with very few flaws. His defense all around is solid from his head movement to his footwork and good takedown defense. He has good kickboxing and mixes in strikes and kicks together perfectly. The Russian is an unpredictable but technical fighter. He’ll throw a variety of attacks while throwing a lot of feints and fakes.

Kuramagomedov throws a lot of lower calf kicks, putting his opponents off-balance then throwing head kicks or the flying knees. He has a natural flow to what he throws going to knees, lead elbows, knees just so effortlessly. Kuramagomedov is very comfortable on the feet but has solid wrestling as well. He will change levels after throwing a combination getting the fight to the mat. Ramazan has three submissions all by an armbar, guillotine, and a Von Flue Choke showing his variety.

Where does Kuramagomedov need improvement?

In his fight with Jordan Williams, Kuramagomedov had to fight through a lot of adversity. He was hit quite a bit and even rocked as he did slow a bit in round three. I don’t think his striking defense is much of a problem because he usually has excellent head movement slipping and ripping. I do think his cardio is a slight problem when it comes to moving his head and his reaction time. Kuramagomedov is still always dangerous still holding power in the later rounds.

Kuramagomedov has already fought for a big stage on ACA and PFL and even the Contender Series. I’m sure he will get signed to a big promotion and get tested right away. He has the skill set to be a major champion one day in the future since he’s only 23-years-old. Kuramagomedov is a legit talent who has a great chance of going 11-0 before facing defeat. His diversity on the feet, his wrestling, and his ground game should take him to an undefeated record of 11-0 no matter where he goes. 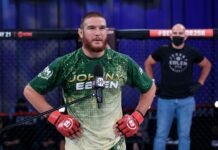