23-year-old Anthony Romero received the news that he would be fighting on Dana White’s Contender Series recently. Competing to complete a dream of his, but Romero knows the dream isn’t complete yet. One more difficult bout stands between Romero and his ultimate goal.

“Nothing is done yet, to me this is just another fight, of course with a cherry on top at the end,” Romero told Cageside Press after news of his fight against Mike Breeden broke.

It actually isn’t the first time that the lightweight has been offered a spot on the Contender Series. The Canadian fighter had the same opportunity last year. However, Romero has fought all but one fight in the California promotion King of the Cage (KOTC). Due to contractual obligations with the promotion, Romero was forced to decline the opportunity to compete for Dana White and a UFC contract. Not this year though.

“At 5-0 I was offered Contender Series, due to my contract with KOTC I couldn’t go compete,” Romero told us. “It was my own fault, my management at the time and I didn’t read for an out clause, so I finished my contract with them.”

Romero who was only 22 at the time he was first offered a spot on DWCS. Despite not only being denied the opportunity, but not knowing if it would ever present itself again, Romero showed insane professionalism. To not speak out on being denied his dream, to honor the contract he signed with the promotion, not many 22 year olds could do that.

“They could write whatever they want in the contract, it’s my fault. I had to man up and fight, I signed that contract. It’s done, I have no hard feelings with KOTC, they treated me well, my family well, now I’m fighting for my dream,” Romero said on the matter.

When asked what fans can expect from him on the Contender Series, the answer was simple from Romero. “Expect the unexpected, sometimes I don’t even know what I’m going to do in there.”

Romero is due to face Mike Breeden on August 25th in season 4 of DWCS. Breeden is coached by James Krause. A winner of three straight in LFA, Breeden has a lot to offer, but Romero believes August 25 is his day to shine.

“We are two guys dominating our local promotions. I’m training for everything. We are fighting for our dream, I have to stop whatever he’s going to do, I expect fireworks from both of us,” he predicted. 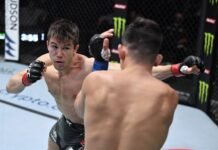