The backdrop to UFC 250 was expected to be a global pandemic, the event offering a distraction from the fear and anxiety that has crept into the lives of many over the past several months. Then came the death of George Floyd, another black man killed at the hands of police.

Suddenly, there was so much more going on. Civil unrest. Protests. Riots. All while a pandemic continues to creep its way into every corner of the country. And globe.

For Aljamain Sterling, who has a key bantamweight fight this weekend at UFC 250, it’s a chance to give fans a little escape from reality. Sterling might have been overlooked for a shot at bantamweight gold — that honor has gone to Petr Yan and Jose Aldo. But he’s been booked against the surging Cory Sandhagen, a fight many expect to serve as a title eliminator.

With the pandemic still in full swing, the fight comes at an empty UFC Apex, rather than an arena packed with fans. The “new normal” that is anything but. Still, the Apex might be the perfect facility for sports right now.

“There’s a lot of history that’s going to be in that building, and to be a part of it is going to be a great thing,” Sterling (18-3) told Cageside Press at Thursday’s UFC 250 media day. “Especially in a time like this where there’s so much going on in the world, to give the fans somewhat of an escape from reality for a little bit, to give us some hope that life can get back to normal, it’s going to be great honor to be a part of that.”

But again, there’s more than a virus spreading across the land right now. Though there’s an argument to be made that racism is itself a virus. In any case, the civil unrest that has erupted in the U.S. is impossible to ignore, even as Sterling prepares for a key fight.

“If I’m being 100% honest, it’s not easy at all,” Sterling answered when asked how he’s coping with it all. “Losing some sleep. Good thing, [one of] my sponsors make this sleeping supplement.”

Aside from a sleep aid, preparing for the fight itself has helped a little. “When you’re in your room by yourself, sitting down, you start thinking about all these things and your mind starts racing,” explained Sterling. “It’s been tough during the day. Training takes my mind off of it, eating takes my mind off of it. Any type of conversation I have with my teammates. If we’re not talking, then the thoughts come back, and at night they wake me up.”

“These are strong emotions, strong thoughts. They creep back in there,” admitted Sterling. “And at the end of the day, I’ve got a big fight, at the end of this week. So I’ve got to really dial it in.”

Sterling, however, underscored that he’s still pretty focused on the fight ahead. “I don’t think there’s anything being taken away from that. There’s just a lot going on in the world. This is just a small part of this. This fight, it matters, but at the same time, it doesn’t matter in the grand scheme of things, in terms of fighting.”

“There’s so much more at stake with everything going on in this world today,” he noted. 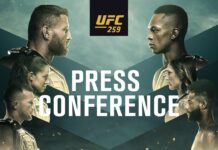