An intriguing welterweight match-up has been added to UFC 250 next month.

Expected to take place June 6, the PPV event had Amanda Nunes and Felicia Spencer throwing down for the women’s featherweight title. Now, Neil Magny and Anthony Rocco Martin will join them.

Magny (22-7) last competed in March at UFC 248, earning a unanimous decision against China’s Li Jingliang. The victory came in Magny’s first fight since 2018, the result of a USADA scandal that ended in the welterweight being exonerated.

Generally a very active fighter, Magny holds the UFC record for wins in a 12-month period (five), and is third in the UFC welterweight division for wins overall, behind Matt Brown and Georges St. Pierre. Sitting out all of 2019, in other words, was a tough pill to swallow.

While the location has not been officially announced, UFC 250 is likely for the UFC Apex in Las Vegas, following Dana White announcing that the promotion’s May 30 show would be hosted there. The Nevada State Athletic Commission has yet to officially greenlight combat sports in the state however. 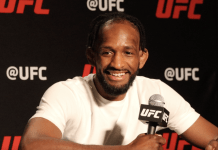