During this MMA hiatus, we’ve taken to scouting globe, honing in on five favorite prospects from each country/territory.

So far, we’ve put the spotlight on Australia/New Zealand, and Canada. This time out, we’ll be looking at China. In MMA terms, China is a nation that is still growing, but it captured the world’s attention when Weili Zhang won the UFC strawweight championship. Outside of Zhang, notable fighters from China include Jingliang Li, Song Kenan, Song Yadong, and Wu Yanan. Not to mention ONE Championship’s Xiong Jing Nan.

Zhenhong Lu (18-6) has a lot of experience and has wins (and losses) against decent competition. On the feet, Lu is a bit unpolished with his striking. He throws wild looping hooks and mixes in single kicks with his chin high. Lu is lost at range, usually finding himself at the end of a jab. He’s an aggressive fighter that will come forward to initiate the clinch however. In the clinch is where Lu is very capable of getting takedowns; top position is where the Chinese fighter excels. He will always stay active with ground and pound, posturing up and landing elbows as well.

Bo Meng is the only person that holds a win over UFC strawweight champion Weili Zhang, which looks pretty darn good now. Meng is a well-rounded combatant who has a lot of power in her hands. Enough to stop someone with just one punch. She’s rapid with her output throwing with her hands and mixing in kicks. She’s an even better wrestler with ferocious ground and pound.

Li Kai Wen is a banger of a fighter who is very fun to watch. He joined ONE Championship in 2014 and has remained there since. He has eleven fights for the promotion and is 9-2, on a current four-fight win streak. Crazy enough, Li is only 24-years-old. Li’s main goal, once he gets in the cage is to put on a show. He bites down on his mouthpiece and slings heavy leather. He has the fastest knockout in ONE Championship history with a thirteen-second KO. He hasn’t shown it much but does have a ground game and wrestling to fall back on. But then, he hasn’t really needed to show it yet.

Xie Bin’s only losses came in his first couple of fights, and he has rebounded well, winning his last seven fights and becoming a solid prospect for China in the process. He doesn’t have much on the feet but has had glimpses of nice clinch work. He also has really good footwork. Bin has solid wrestling and once on the mat, he’s in his comfort zone. Bin has exceptional positional grappling and is a good submission threat especially with the D’Arce choke.

Liucai Cui by far has the most experience of any fighter on this list, with 29 total fights despite being only 29-years-old. He’s a well-rounded seasoned fighter who is on a big 13-fight win streak. Cui has finished fights on both the mat, from ground and pound and submission, to a TKO and knockout on the feet. He’s an explosive fighter who is very fun to watch who will catch the audience’s attention in just one fight. 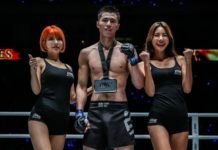