UFC 249 will not take place in Brooklyn, New York next month as originally planned. Or anywhere else in the state. First reported by the New York Times, the card — featuring the long-anticipated lightweight title fight between Khabib Nurmagomedov and Tony Ferguson — will not be allowed to take place in New York, per that state’s athletic commission.

The event had originally been scheduled for April 18.

In a statement issued to MMA Fighting, an NYSAC official wrote that “Out of an abundance of caution and in line with recent guidance issued by the Center for Disease Control and New York State, the New York State Athletic Commission informed the UFC that UFC 249 cannot be held in NY.”

The news is not surprising as measures to combat the ongoing coronavirus pandemic continue to grow. On Wednesday, Canadian Prime Minister Justin Trudeau announced that non-essential travel between the United States and Canada had been halted. Nearly every state and province between those two nations have implemented a ban on large gatherings. Earlier in the week, the UFC finally conceded defeated, postponing their next three events, which had been scheduled for London, Columbus, and Portland.

Prior to that decision, the promotion had attempted to relocate the cards to Las Vegas. However, the Nevada athletic commission has suspended combat sports until at least March 25.

UFC President Dana White, however, has vowed that UFC 249 will go on — although he admitted previously that it likely would not be in New York. “No crowd. Whatever it takes,” White promised. “Probably not even going to be in the United States, but this fight’s going to happen.”

Lightweight champion Khabib Nurmagomedov’s father, Abdulmanap, has suggested that the card could be held in Dubai.

The bout between Nurmagomedov and Ferguson has notoriously been scheduled four times in the past. On each occasion, the fight was cancelled, with each fighter pulling out twice, mostly due to injury. That has led MMA fans to believe the bout is downright cursed.

The UFC has yet to comment on the NYSAC’s decision. 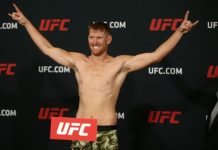 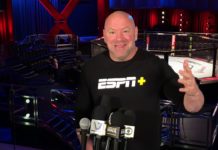