Former UFC fighter Jon Tuck is facing serious charges in his native Guam. Tuck (11-5), who competed for the UFC from 2012 to 2018, was most recently seen fighting at the hybrid Bellator/RIZIN event in December. He was arrested Monday on suspicion of third and fourth degree criminal sexual conduct.

The allegations against Tuck were first reported by the Guam Daily Post. They stem from a complaint made by a victim in Tumon, a district on the Northwest coast. The Guam Police Department’s Domestic Assault Response Team investigated the complaint, and carried out the arrest.

Cageside Press confirmed the news with Guam PD Sgt. Paul Tapao, who cited existing local news stories as no further information is available at this time.

A report by the Pacific Daily News sheds more light into the situation. According to that report, citing court documents, the 21-year old victim stated that on March 4, at approximately 3AM, she ran into Tuck at a Tumon restaurant. There, she alleges, Tuck took her by the wrist and led her outside.

The victim initially believed they were going outside to smoke. Instead, Tuck began undressing her, pushing her up against a wall, and forcibly raped her when she resisted. Tuck reportedly told the woman “no one can know due to my work,” according to court documents.

The victim then went back into the restaurant and reported the incident to a friend, who proceeded to film a confrontation with Tuck.

“She was not expecting you to pull her pants down and stick your ******* **** inside her,” documents list the witness as telling Tuck. The fighter reportedly replied by saying “I did not just go straight up into that, we were playing around.”

Tuck’s last fight saw him earn a knockout of Ryuichiro Sumimura at December’s Bellator Powered by RIZIN card in Saitama, Japan, just outside Tokyo. The fight was listed as a RIZIN welterweight bout. Tuck had been expected to compete at Bellator’s Dublin card in September 2019, against Brandon Girtz. However, an injury to Girtz saw the fight scrapped. 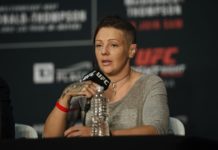