UFC Rio Rancho kicked off with a knockout win for Raulian Paiva.

Flyweight action served as the curtain-jerker for UFC Rio Rancho on Saturday. Going down at the Santa Ana Star Center in Rio Rancho, not far from Albuquerque, the top of the card was a heavyweight contender’s bout, at least on paper. The card opener? That had the 14th and 13th ranked flyweights, Raulian Paiva and Mark De La Rosa respectively, throw down.

Not that in the UFC’s latest rankings update, there was no fifteenth ranked fighter, an odd result given Tyson Nam and a few other names floating around the division. In any case De La Rosa and Paiva were both looking to snap two-fight win streaks.

De La Rosa was also making a bit of history on Saturday, becoming part of the first husband-wife team to compete on the same UFC card, alongside wife Montana.

With the action underway, De La Rosa immediately opened up with a leg kick, and then Paiva responded with one of his own. Paiva went for a takedown and backed De La Rosa into the fence. De La Rosa shrugged off the takedown and then landed a big right hand that landed clean. Paiva ate the punch and then landed a quick leg kick. Paiva found his range, landing combinations up against the fence on the backing up De La Rosa. Paiva landed a right hand and started to get into his rhythm near the end of the round, however, De La Rosa also had his moments, despite being on his back foot for the majority of the round.

Raulian Paiva has solidified himself as a legitimate contender at flyweight. 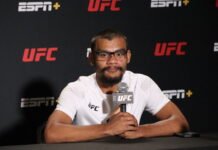 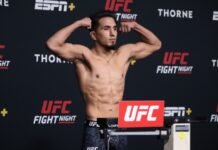