One of the men responsible for killing UFC fighter Raulian Paiva’s girlfriend, and attempting to kill the bantamweight himself in 2018, has been sentenced to 16 years in prison.

Elber Nunes Zacheu was handed the sentence both for the death of Tieli Alves, and for attempting to kill Paiva in a vehicular homicide on October 21, 2018. While Paiva survived the incident, Alves succumbed to her injuries after slipping into a coma. She never awoke, dying six days later.

Zacheu was a passenger in the car that intentionally struck the pair after they left a Santana, Brazil nightclub on motorcycle. The two men later implicated in the killing had been harassing Alves in the club earlier in the evening; when she and Paiva made their exit, the duo followed.

MMA Fighting was first to report news of Zacheu’s conviction on Monday. The report notes that the convicted killer must pay R$ 35,000 to Alves’ family, Paiva, and another man who was hit by a bottle earlier in the evening, prior to the incident that cost Tieli Alves her life.

The man driving the car, Johny de Souza Amoras, had been a fugitive, but was arrested a day prior to Zacheu’s trial commencing. His trial is expected to commence sometime in 2023.

After the death of Alves in 2018, Paiva considered retirement, but chose to fight on after Alves’ parents encouraged him to continue his career. He stated at the time, however, that “my life has no meaning anymore, really.”

In a statement provided to MMA Fighting following Zacheu’s sentencing, Paiva said that “That’s not enough time for what he did, the crime he committed, but justice is being done.”

Alves never got the chance to see Paiva compete in the UFC — he won his Contender Series fight in August of 2018, and did not debut inside the octagon until February of 2019. The 27-year old has posted a 4-4 record inside the promotion to date, while facing tough competition including Sean O’Malley, Kai Kara-France, and Kyler Phillips. 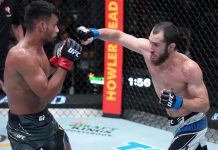