It was one of those moments where fighters simply book themselves. Perfect matchmaking, especially with Werdum’s USADA suspension having recently been reduced.

Now, as first reported by Brazilian outlet Combate, the fight is a done deal. The pair will face off at UFC 250 this May in Sao Paulo, Brazil. And we’ll find out whose jiu-jitsu is better, in a must-see fight for grappling fans.

Werdum (23-8-1), active since 2002, is a veteran of PRIDE and Strikeforce, but for a while was simply known as the man who upset Fedor Emelianenko. That was back in 2010, when the Brazilian caught ‘The Last Emperor’ with a triangle arm-bar.

It was a shock upset, but his next outing was a fight many fans immediately wanted to forget — an action-free fight with Alistair Overeem, part of the Strikeforce heavyweight grand prix. Werdum wanted to avoid the stand-up prowess of ‘The Reem,’ while the Dutch fighter wanted nothing to do with Werdum’s ground game. End result, a fight scare on action.

When the UFC absorbed Strikeforce, however, Werdum went on a tear, winning five straight fights including capturing the interim heavyweight title before meeting then-champ Cain Velasquez at UFC 188 in 2015. In a shock upset, Werdum submitted a fading Velasquez in the third round.

His reign didn’t last, however, as Werdum was knocked out by Stipe Miocic in his very next fight. Since then, he’s traded wins and losses, but has not competed since a 2018 fight against Alexander Volkov.  In September of that year, Werdum was scheduled to face Oleinik at UFC Moscow, but was pulled from the fight. Later, it was revealed he had tested positive for anabolic agent trenbolone. A two-year suspension was handed down by USADA at the time.

Oleinik (58–13–1) is 3-2 in his past five fights, dating back to 2018. All three of those wins have earned the submission specialist Performance of the Night awards. The Ukrainian-born Russian, who resides in Parkland, Russia, is the only fighter to win a UFC bout via an Ezekiel choke. 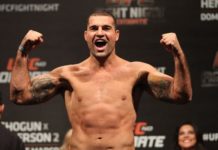 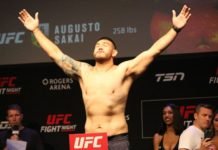 Blagoy Ivanov vs. Augusto Sakai On Deck for UFC 250