You know you’ve made it as a UFC fighter when a former champion calls you out. That’s that case with UFC 246 winner Aleksei Oleinik. The dangerous submission ace forced a tap from Maurice Greene on Saturday night in Las Vegas. Shortly thereafter, none other than Fabricio Werdum was calling him out.

Congratulations @oleynikufc all my respect for you BUT I think my JiuJitsu it’s better, let’s dance you can be my special guest for my return in the UFC

“Congratulations,” Werdum said while addressing Oleinik on Twitter. “All my respect for you BUT I think my JiuJitsu it’s better, let’s dance you can be my special gues for my return in the UFC.”

Werdum (23-8-1) has been out of action since a USADA sanction was handed down stemming from a failed 2018 drug test. The Brazilian actually retired for a time while suspended, which put his suspension on pause. However, after reaching a deal with the anti-doping agency, Werdum is eligible to return to action on April 1, 2020.

A BJJ black-belt, Werdum is known as one of the most dangerous submission specialists in the UFC, and especially in the heavyweight division.

So is Oleinik (58-13-1). While Werdum boasts 11 submission wins as a professional, Oleinik has an absolutely insane 46 victories via submission.

Both men are 42-years old. Both are veterans of the sport. This one seems like a no-brainer for the UFC to book. 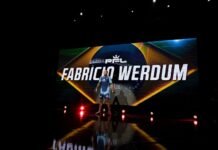