After both fighters ran up against opponents with weight struggles, Claudia Gadelha and Marina Rodriguez will face off at UFC Oklahoma City.

Claudia Gadelha was supposed to fight last month at UFC 246, until opponent Alexa Grasso missed weight by over 5lbs. With the fight pulled from the card, Gadelha was in need of an opponent — especially with Grasso likely moving up in weight.

Wednesday, the UFC announced Gadelha’s return. The former strawweight title challenger and perennial contender will face off with Marina Rodriguezat UFC Oklahoma City this May.

Rodriguez (12-0-2) remains undefeated, although in her last outing at UFC DC, she picked up her second draw in four UFC fights. That came against Cynthia Calvillo, who coincidentally also missed weight for that fight.

With both fighters having dealt with opponents missing weight in their last outing, rest assured they’ll be on top of weight cuts in Oklahoma City.

The UFC Oklahoma City card takes place May 2, 2020 at the Chesapeake Energy Arena in Oklahoma City, Oklahoma. No main event has been announced for the card to date. 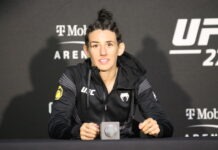 UFC 272’s Marina Rodriguez: ‘I Have To Be Next’ For Title Shot 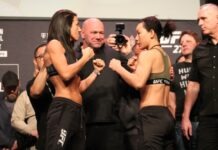