On Friday, all fighters hit the scales for the official weigh-in. What’s left past this point will be but a photo op. Friday morning is what mattered, and the fight that matters most came together without a hitch.

Not everyone’s morning went so smooth however. While Conor McGregor and Donald Cerrone hit the scales and made weight without issue, Alexa Grasso had a huge miss. She came in 5.5lbs over the 116lb strawweight non-title fight limit. Due to NSAC regulations her fight with Claudia Gadelha has been cancelled.

Full results and highlights are below!

*Alexa Grasso weighed in 5.5lbs over the strawweight limit. Her fight with Claudia Gadelha has been cancelled by the NSAC

**Sabina Mazo came in 0.25lbs over the flyweight limit, and was given an extra hour to make weight. She made weight on her second attempt. 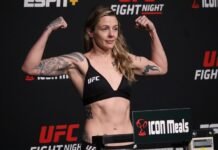