Cage Warriors 108: Jones vs. Mäntykivi was live on Saturday, October 12, 2019. Check out the results of the event below.

Cage Warriors 108: Jones vs. Mäntykivi was live from the Viola Arena in Cardiff, Wales, with eight professional bouts on display. The event was broadcast live on UFC Fight Pass.

In the main event, undefeated Welsh prospect Mason Jones looked to continue his winning ways, when he faced Finland’s Aleksi Mäntykivi in a lightweight contest.

Jones (7-0) made his professional debut in October of 2017 and has had all but one of his professional contests with the UK’s leading MMA promotion, Cage Warriors. In his most recent outing prior to Cage Warriors 108, Jones defeated fellow contender Donovan Desmae via unanimous decision. The 24-year-old has finished five of his seven professional wins, three via submission and two via knockout. Jones was also featured on our weekly prospect report for this week.

Mäntykivi (13-4) looked to play spoiler in enemy territory against Jones. Mäntykivi most recently knocked out previously undefeated Kayan Kruschewsky back at in April. In his only Cage Warriors appearance so far, Mäntykivi lost to former title-challenger Jack Grant. The biggest win of Mäntykivi’s career came in 2016, when he knocked out highly touted prospect and now recent Bellator signee Soren Bak in just 82 seconds. The Finnish fighter has finished nine of his 13 professional wins, six via knockout and three via submission.

Also on the card, self-proclaimed gangsters faced off on short notice as Oban Elliott faced James Lilley in the co-main event. In addition, Martin McDonough made his MMA return and former Cage Warriors title-challenger Josh Reed was back in action. Check out the full results below. 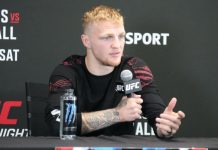