The men’s welterweight and women’s lightweight finals are set following PFL 7 2019, as Kayla Harrison will face Larissa Pacheco once again, and David Michaud will take on Ray Cooper III.

PFL 7, the first show of three playoff events in the Professional Fighters League’s 2019 season, turned out to be a very, very fun event. Going down in Las Vegas Friday night at the Mandalay Bay Events Center, the card saw two fights in a night for the welterweights, and semifinal action for the women’s lightweights.

Twists and turns were in abundance. Kayla Harrison got a new opponent on 24-hours notice, with Bobbi Jo Dalziel replacing Genah Fabian. Chris Curtis retired following a loss to Magomed Magomedkerimov in the quarterfinals, but then returned as a “lucky loser” when Magomedkerimov was unable to compete in his semi-final fight. Sarah Kaufman was upset by Larissa Pacheco, who will meet Kayla Harrison in the finals on New Year’s Eve.

See below for results, and a gallery of highlights courtesy of the Professional Fighters League. 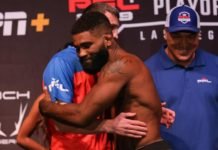