Paige VanZant plans on finishing out her UFC deal by the end of 2019.

She last fought in January, but since then, Paige VanZant has been dealing with a nagging arm injury. VanZant (8-4), who defeated Rachel Ostovich at UFC Brooklyn by submission, re-injured her arm in January, in a sparring session. After initially being told she would not need surgery, she required just that.

Speaking to Cageside Press over the weekend, while working as a commentator at Kinetic 1, VanZandt said that she plans on getting a second fight in 2019.

“The arm is great. I got a great scar,” she said, showing off the now-healed wound pretty much running from her elbow to her wrist. “But I just announced on TMZ today that I’m cleared to start training, and I plan on fighting before the end of the year.”

A lot has changed since VanZant last set foot in the octagon. Jessica Eye and Liz Carmouche both fell to champ Valentina Shevchenko. Michelle Waterson is paired up with Joanna Jedrzejczyk. Katlyn Chookagian is a possible candidate for the next title shot. Henry Cejudo keeps doing cringy things like challenging Shevchenko to an inter-gender fight.

VanZant, however, isn’t worried about an opponent just yet. “I wait for the UFC to bring the names to me. It’s typically really easy for me to find a match-up. I’m really strictly focused on getting as prepared as I can, because I have had three arm surgeries, all on the same arm. So I’m just going to get in the best shape I can for the last fight on this contract.”

And yes, VanZant appears ready to fight out her deal, like another hot young star, Sage Northcutt, did before her. With husband Austin Vanderford fighting this weekend in Bellator MMA, however, ONE may not be a landing spot. And there’s nothing to say she won’t return to the UFC — but the last quarter of 2019 could be very interesting for ’12 Gauge’ Paige. 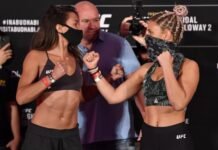