Rudy Schaffroth returns to the cage on August 24 at Bellator 225 with a tough test against Tyrell Fortune. He plans on getting some revenge on his former college teammate.

Bellator returns to the state of Connecticut this Saturday from the Webster Bank Arena in Bridgeport with a rematch between Matt Mitrione and Sergei Kharitonov — the two briefly battled back in February when the fight was ruled a No Contest after Mitrione accidentally kicked his Russian counterpart in the groin, causing the fight to be stopped in just 15 seconds in the opening round. While the Mitrione vs. Kharitonov bout is receiving the top billing at Bellator 225, the battle between undefeated prospects Tyrell Fortune and Rudy Schaffroth might hold more significance for the future of the promotion.

In previous interviews, Fortune stated that the fight between the two former wrestling teammates at Clackamas Community College has become personal, though Schaffroth sees it differently.

“It’s absolutely not personal,” Rudy Schaffroth told CageSide Press. “I didn’t call him out. I didn’t ask for this fight at all. His name was on the other end of a phone call five weeks ago. That’s it, nothing personal between me and him… I would have rather fought him later on for more money, but I don’t make those decisions and I certainly am not going to turn down a fight.”

Both fighters enter the contest with identical records at 6-0 but their paths taken came from much different directions. Fortune immediately stepped onto the big stage with all six of his bouts coming under the Bellator banner. Schaffroth, on the other hand, spent years crafting his game as an amateur and didn’t sign with Bellator until he compiled a 4-0 record. During his years of picking up experience, the former NCAA wrestler focused greatly on his striking — which has been evident with all six of his wins coming by first-round KO or TKO.

“I feel like I might be even more comfortable in the standup than my wrestling because wrestling has more involved after the takedown. But with striking, if you land those big blows, you don’t have to do anything after,” Schaffroth pointed out. “Wrestling requires more effort, gets me more tired, empties my gas tank faster. I try to avoid that at all costs. There is also the fact I just like throwing hands at dudes and like to knock them out.”

Schaffroth used to fight at super heavyweight before losing 30 pounds —which he believes has improved his speed, power, cardio, and overall well-being. He trains under the tutelage of Fabiano Scherner and Chael Sonnen at American Top Team Portland. He believes his high-level training has made him a more well-rounded fighter than Fortune.

“I think I have the advantage in many areas,” Schaffroth pointed out. “He’s got good takedowns. He’s the only fighter I have faced that might be able to take me down. If he does, I’m confident I can get back up. If he stands on the feet and doesn’t take me down, I feel very good about that. He is my toughest opponent, but I’m his toughest opponent by three or four times… I have the reach advantage, I have the standup advantage, I think I have the advantage in jiu-jitsu. I feel very confident about this matchup.”

This wouldn’t be the first time the two heavyweights met in a competition. The two wrestled in college with Fortune edging the match with a 7-3 score. Due to already falling to his Bellator 225 opponent, he believes Fortune might be looking past him.

“I respect him and his ability but I don’t know if he has every respected me and my ability,” Schaffroth said. I don’t think he has ever viewed me as an equal. I feel he will be overconfident. It’s gonna be a huge mistake.”

Rudy Schaffroth wouldn’t give an official prediction on how the fight will go down but said, “Tyrell knows what he is in for on Saturday, whether he will admit it or not.”

Bellator 225 goes down this Saturday, August 24, at the Webster Bank Arena in Bridgeport, Connecticut. 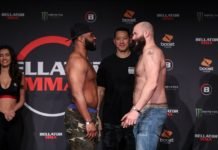