Stipe Miocic found inspiration for his body shots on Daniel Cormier at UFC 241 in part from the legendary Anderson Silva.

Anaheim, CA — Once again, Stipe Miocic is the UFC Heavyweight Champion of the World. The Baddest Man on the Planet. At UFC 241 on Saturday, he finished Daniel Cormier by TKO in a fourth round comeback to reclaim the belt.

It was a fight Miocic had held out for since losing the title to Cormier last year. D.C. had gone on to defend the belt against Derrick Lewis. He was the favorite heading into the fight. Miocic, however, proved why he’s the man many consider the best heavyweight of all time.

The finish was set up by some powerful body shots, and Miocic discussed those with reporters including Cageside Press following the fight.

“I actually talked to my coach earlier in the week about it. I was like ‘man, Cormier’s always lifting his arms up when he’s throwing punches or blocks punches.’ And I was like ‘you know what, no one really tests his body, I’m going to start going to it.'” Something else twigged for Miocic as well. “I remember the Anderson Silva fight, UFC 200, he caught him with a body shot, a kick. I’m like ‘you know what, maybe he’s a little weaker than I thought.’ I hit him with a couple, and I saw him wince.”

Those, of course, brought about the finish. But Cormier dominated through the first two rounds, and arguably even the third. At one point, D.C. even hoisted Miocic up on his shoulders for a slam. “I thought I was up there for an hour. What was that?” Miocic questioned. “I thought we were doing WWE or something. Is he like calling me out? I don’t know. It was weird.”

“It happens. Listen it’s a fight, anything can happen,” he added about the position, one he hadn’t really experienced before. “He was getting some good shots on bottom, but I wasn’t really worried. I was smart about it. He was tough, he’s an amazing wrestler. I just started off slow in the first two rounds. I wasn’t me. In the third round, I knew I was a better fighter.”

“It took me a little time to get my mojo,” he added.

Now it’s on to what’s next, but not before a little R&R. Miocic, notorious for not being one to call out opponents, said that “I just bought a new home. Been there for two weeks. I’m going to go in the hot tub, the pool, let my body rest, and we can figure it out from there.” 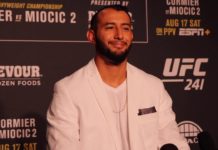