In calling out Jorge Masvial, Nate Diaz is making a point to recognize great fighters as those who have survived at the top of the game the longest.

Anaheim, CA — Three years away, zero fights since 2016, and Nate Diaz looked like he hadn’t missed a step at UFC 241. Against Anthony Pettis, he dominated in all areas. It was a competitive fight early, but as the rounds wore on, Diaz slowly but surely took a clear lead. By the end, it didn’t seem remotely close. There was even a near finish or two.

In fact, when Pettis went down under a barrage of knees and punches, “I thought it was the beginning of the end, for sure,” Diaz told reporters including Cageside Press at the UFC 241 post-fight press conference. It wasn’t. Pettis held on to the bell, but that was just a moral victory, if that.

Following the fight, Diaz had a surprise callout: Jorge Masvidal. It’s a fight suggestion that went over very well with fans. One Diaz wants “just because you have to recognize who’s the best of the best in this game, and it’s not who they’re saying it is,” he said. “It’s who I’m saying it is. It’s the guys who have been in here forever, and are still on the top of the game.”

“Like Pettis,” for example, “who just knocked out Thompson, who was just fighting for the 170 title a whole bunch of times. And fights Pettis, Pettis knocks his ass out real quick. Who’s the real badass in the 170 division? And then they’re trying to pump up a dude then Masvidal goes in there and knocks his ass out. He’s been in here since I started fighting in 2004 I think.”

“He’s either been there right then or a little longer,” Diaz continued. Nate officially made his pro debut in 2004, Masvidal in 2003. “And he just did that. And I just did that [beating Pettis]. So that’s the best fighter to me. The best martial artist who’s still on top of the game. Like I said I’ve been through waves of these guys. There’s a couple guys who come in, and then they fight for a title, or peek in, have three good fights, they fight for a title, they get the belt, then they get their ass whipped, then they have another loss, maybe have another win, then another loss, then they’re gone with the wind. That’s not the best fighter to me. I’ll be here in forty years fighting, still killing.”

Diaz recalled a couple of examples of fighters coming and going after being hyped up. “Remember when Jake Ellenberger was peaking for a minute, then he was the guy, then he was worked over then he had a couple fights then he was just gone.” Another was “Rick Story. I can’t even think of other examples but there’s a whole bunch of people. Gray Maynard was one of the best guys for a minute. Everybody’s just here and then gone, here and gone I’m like ‘what’s up? I’m still here.’ Those are the best fighters in the world to me.”

While it’s nice having Nate Diaz back in the cage, it was a three year wait between fights. So what are the chances he jumps right back in? Said Diaz on Saturday, “if everything works out right how it’s supposed to work out, I’ll fight next month. If nobody’s in a hurry and wants to get this done how it’s supposed to be done, and do it right, and treat it like it should be treated, I ain’t even in no rush.” That’s a scary thought, but Diaz added that “it’s not me who’s going to be doing the sitting out, it’s them that’s going to be holding me out, or people not jumping on it trying to get it done. And that’s where I’ve been for the last three years. Because I never stopped training camp.”

With luck, it should work out. Especially given Dana White admitting Saturday that Diaz is, in fact, a needle mover. In the meantime, Diaz just wants to face Masvidal. “Now we’re fighting for the baddest motherf*cker in the game belt. And that’s mine. I’d like to defend it against Jorge Masvidal.” 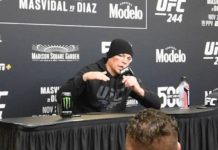 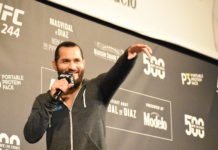 UFC 244: Pros React to Rock, Diaz Walkout, Finish that was Anything But BMF 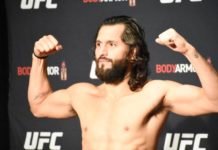