No one saw the finish coming as quick as it did when Maxim Grishin took on Mikhail Mokhnatkin at PFL 6 2019 on Thursday night in Atlantic City.

Light heavyweights Maxim Grishin and Mikhail Mokhnatkin entered PFL 6 2019 in very different spots. With three points from his first fight of the season, Grishin was in the playoff picture entering the Atlantic City event. Mokhnatkin was on the outside looking in to start the night, however, 0-1 and pointless.

The all-Russia affair saw a feeling out period between Grishin and Mokhnatkin early, until Grishin caught his opponent, with what looked like a relatively pedestrian punch. Mokhnatkin, however, went sailing back, hitting the canvas, and the referee immediately waved it off. Mokhnatkin didn’t protest the stoppage much,

The fight was over in the blink of an eye, and with it, Maxim Grishin had six points, on top of three from his last bout. That would leave him in a good slot heading into the post season, with only Emiliano Sordi ahead of him by that point of the night. Following the fight, speaking to reporters backstage, Grishin would explain that he knew his opponent was out as soon as the punch had landed. 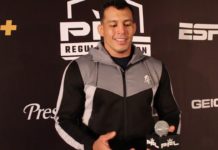 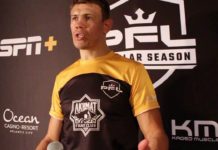