Vinny Magalhaes made some key adjustments between his two PFL 2019 regular season fights.

Atlantic City, NJ — Last season in the Professional Fighters League, former UFC athlete Vinny Magalhaes went all the way to the final — only to be stopped by Sean O’Connell. A cool million bucks dangled tantalizingly, then snatched up when Magalhaes’ corner called it a night following the third round.

So you had better believe Magalhaes is extra motivated this year — but the 2019 season started on a sour note. Magalhaes found himself finished via TKO at this year’s PFL 3 show. He bounced back, however, at PFL 6 2019 in Atlantic City, not just getting back in the win column and onto the scoreboards, but into the post season as well.

Which means the BJJ ace’s plan is back on track for the time being. Magalhaes talked about his goals with media outlets including Cageside Press following his arm-bar submission of Rakim Cleveland at PFL 6.

“Since I actually signed with PFL, not [just] for this year,” he started, “I set a goal, a long term goal. It’s not just win one season and retire. My goal is to maybe go three seasons back-to-back, make that million dollars three times, in a row if possible.”

The plan was chugging along nicely last year, until he ran into O’Connell. “I had my first chance, missed the shot.” Then came his loss to Emiliano Sordi back in May. “When I lost the first fight this season, it kind of sucked. It had been a while since I had lost two fights back-to-back. Especially the way it happened, too. Also it’s the first time I’ve been finished in two fights back-to-back.”

For Magalhaes, the finish in his season opener never sat well with him. Still, “even though I don’t agree with the finish, that doesn’t matter. It’s the first time I’ve been finished back-to-back. So it was a little frustrating.”

Magalhaes knew it was time to adjust. “I started to watch my fights. I sat down with my coaches, and I started to look at things, what has gone wrong with my training, my preparation? Not just in the gym, but also like fight day, what have I been doing wrong, what about when I get in the cage?”

“First, I feel like I was overdoing in the locker room,” Magalhaes continued. “I was starting warm-ups one hour before, and go like crazy, like I was getting into fights in the locker room. Then by the time the fight comes, I’m tired. Not an excuse, just it happens. Things I had to keep more under control. It was not the reason I lost those fights, but it’s more of those things, I could fix that, try to make things better.”

Magalhaes also felt his was making poor decisions in the cage. “During the fights too, I am better. It’s not about like bragging or anything, but I am better than any of these guys when it comes to ground game. And I am, it’s just a fact. When it comes to credentials, the way they perform on the ground, I am better than these guys. So why would I perform in a sloppy way? Why would I be spazzing out when I take the fight to the ground? So it’s just like, well, I have to be more patient.”

“If I stay calm, I can display 100% jiu-jitsu, and I’m going to be able to beat these guys,” he continued. “In the previous fights, I was able to get my opponents down, but instead of actually working on like guard pass, control, working the submission patiently, I was throwing punches with no power. So what was I really getting from that? Nothing, I was just getting myself tired, losing control.” When the fight eventually went back to the feet, “now I’m not bringing my A-game anymore.”

Ultimately, “there was a lot of changes I was able to make for this fight, and hopefully we’re going to make this even better for the playoffs.”

One key number was highlighted following Vinny Magalhaes win over Cleveland in Atlantic City: Five. Five first round finishes, all five of which came in under two minutes. That’s an impressive  feat by the submission ace. The motivating factor of the PFL’s points system is a big part of that.

And at PFL 6, “for this it was a lot more important for me to get the first round or second round finish. That was my goal, I got to get here today and get that first round or second round finish.” Because, Magalhaes explained, “I felt like with five or six points, I was guaranteed to qualify for the playoffs. I was not thinking of three points, four points. I was thinking about five and six, it’s guaranteed.”

Magalhaes’ prediction proved accurate, and now, he’ll face Rashid Yusupov in October, at home in Las Vegas. Another chance for the talented Brazilian to score a million bucks. 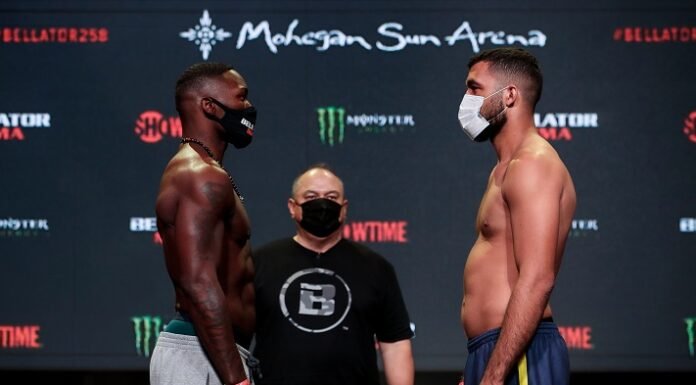