Brooklyn natives Heather Hardy and Amanda Serrano are set to collide on September 13 at Madison Square Garden in a boxing bout for the WBO Featherweight Title.

Two of the most notable boxers turned mixed martial artists will be meeting in the squared circle as Amanda Serrano will challenge Heather Hardy for the WBO Featherweight Title.  The fight is set to air on DAZN as part of the Devin Haney vs Zauer Abdullaev undercard on September 13 at Madison Square Garden.

In the last several years, both women have raised their profile by making the jump over to mixed martial arts.  Heather “The Heat” Hardy arrived in Bellator to much fan-fare in 2017 and has gone 2-2 in the cage.  Her most recent MMA fight was with Taylor Turner in June where she came up short in what became a one-sided affair.  Amanda “The Real Deal” Serrano has had two appearances in Combate Americas, having a draw in her debut and securing a standing rear-naked choke against Ere Ordoñez last October.

The two are regarded as two of the best female boxers of the last decade, with Hardy (22-0-1) undefeated with 22 victories to her resume.  Serrano (36-1-1) has made history as one of only two boxers, the other being Manny Pacquiao, to win titles in seven different weight classes and is riding a 12 fight win streak.  The two have competed in close to the same weight classes in boxing in their careers and they both have competed exclusively in the flyweight division in MMA.

I’m getting a ton of messages/questions about my fight on September 13th. I’m not a store so I’m not trying to sell anything. Fights are Won or Lost in the Ring Not in an Interview/podcast. I have nothing but Respect for my opponent & that’s as much as you’ll get from me. TY 🙏😉 pic.twitter.com/RY1a8W4M74

Serrano has discussed her close friendship with Hardy in the past, going as far to say only the right offer would even make her consider the possibility of a fight with her fellow Brooklynite:

“We’re good friends.  We call her my adopted sister.  She’s a good friend of mine.  She’s always said that she would never fight me and I would never fight her.  So it’s a friendship thing.  But I’m pretty sure if the money was good and it was a big thing then we’ll talk to each other and say ‘Screw it, let’s do it!’  Other than that we’re friends.”

Prior to her fight with Turner in June, Hardy was asked about a boxing fight with Serrano by Danny Segura of MMAFighting and explained:

“There was some talk about it before [the fight with Turner.]  It was a lot of on-and-off.  They said in January they wanted to fight me but she was going to do an MMA fight so it had to be shelved.  And by the time she was deciding she wasn’t going to do an MMA fight I was.  So it was like ‘so can you come up with a dollar amount before I have to sign my contract?’ and that never happened after giving them a month.  By them I mean the boxing promoters obviously because it had to be signed by DAZN and through Eddie Hearn because that’s who Amanda’s with.  I’m not with anyone and we couldn’t get a contract so I said I don’t even want to hear about it before my MMA fight.”

Farewell…. for now. Thanks @BellatorMMA 🖤👸🏼💗 Heading back to boxing for a minute. 🔥 pic.twitter.com/HHYaeygjpi

Hardy has said that she plans to “head back to boxing for a minute” while Serrano has said on social media that she expects to take an MMA fight in December in Puerto Rico.  In an interview with Off the Brawl, Serrano and Hardy promoter Lou DiBella said that both women are committed to facing Irish boxing sensation Katie Taylor next should they be victorious in September. 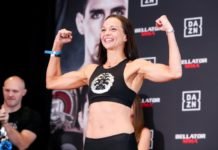