Ariane Carnelossi signed with the UFC for a short-notice fight that was supposed to take place this weekend. However, her opponent pulled out, but she’s still earned a spot on the roster.

The UFC is coming to Montevideo, Uruguay, on October 8. The event will be held in the Antel Arena. The event is headlined by flyweight champion, Valentina Shevchenko defending her title against Liz Carmouche. The card is basically full and it features a title shot, many rising stars, and five debuts. Ashlee Evans-Smith was scheduled to fight Taila Santos but Smith would pull out due to injury. Filling in for Evans-Smith was supposed to be newcomer Ariane Carnelossi. However, Santos pulled out of the fight and it was subsequently canceled. Nevertheless, the Brazilian is now on the UFC roster.

How will Ariane Carnelossi Fare in the UFC:

Cardelossi is an excellent signing on short notice who is a very fun fighter, still young, and a finisher. Her only loss was in her pro debut to Amanda Ribas, who just won her UFC debut so there is no shame in that at all. “Sorriso” is a bull, always coming forward looking to land big shots and never stopping being the sole reason she has nine finishes. The Brazilian has power but it’s her constant pressure and will that breaks her opponents. Carnelossi likes to throw in some kicks into her combinations as well. While it’s good to mix it up, she tends to throw single kicks and keeps her hands low, asking to get countered. She stands squared up which makes it easier for other fighters to apply leg kicks and tee off on the jab. She’s aggressive and powerful, but the technique isn’t there, throwing wild looping hooks. Her takedown defense has looked solid and so has her cardio. I see a good technical striker beating her. 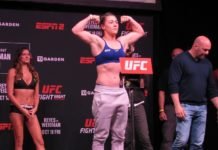 Welcome to the UFC: Roman Bogatov