UFC 243 in Melbourne, Australia will see Holly Holm and Raquel Pennington run it back.

Holly Holm is returning to the scene of the crime. Or, at least, the scene of the biggest victory of her career. Holm (12-5), who knocked out women’s MMA legend Ronda Rousey in Melbourne, Australia at UFC 193 in 2015, has been added to UFC 243 in the Australian city later this year. There, she’ll meet Raquel Pennington (10-7) for the second time. ESPN was first to report the news.

Pennington is the fighter who welcomed Holm to the promotion back in 2015. Holm’s split decision win over ‘Rocky’ sparked a three fight win streak, the final victory of which was the infamous head kick knockout of ‘Rowdy’ Ronda Rousey. Since that championship moment, however, Holm has struggled to find any sort of consistency.

‘The Preacher’s Daughter’ lost the belt in her first title defense against Miesha Tate. That fight would set the tone for things to come. It was a fight that saw Holm in control, until a late comeback by Tate. A pair of unanimous decision losses followed, to Valentina Shevchenko and Germaine De Randamie, the later in a highly controversial women’s featherweight bout, for the inaugural 145lb title. Despite being in control through much of the fight, and hit late twice, in two separate rounds, Holm was on the wrong end of things on the scorecards.

Holm, in fact, has won just twice since her fight with Rousey, against Bethe Correia and Megan Anderson. It’s worth noting, however, that the 37-year old has been fighting exclusively against the top of two divisions. Her other losses came to Cris Cyborg and Amanda Nunes, both in failed title bids at 145lbs and 135lbs, respectively.

Astoundingly, Holm is 5-5 in her UFC career.

Raquel Pennington, meanwhile, bounced back from the Holm loss in 2015 to go on a four fight win streak, which punched her ticket to a shot against Nunes, who currently holds both the bantamweight and featherweight titles. That bid for the 135lb title went sideways, as Pennington was pummeled in a fight that had many calling for her corner to throw in the towel. After dropping her next fight to Germaine de Randamie, she bounced back with a split decision win over Irene Aldana at UFC San Antonio last month.

UFC 243 takes place October 6 (October 5 for those in North America) at the Marvel Stadium in Melbourne, Australia. Robert Whittaker vs. Israel Adesanya is expected to headline. 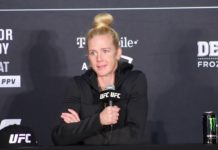