Las Vegas, NV — The author of one of two highlight reel flying knees on Tuesday at Dana White’s Contender Series, Aleksa Camur is now a UFC fighter. Training alongside none other than former heavyweight champ Stipe Miocic at the Strong Style gym, Camur (5-0) was in the main event of the sixth episode this season. He’s now a welcome addition to the promotion, and discussed the victory with media outlets including Cageside Press post-fight.

“It’s absolutely insane, man. A fight’s a fight, if you go anywhere. I expect to win always,” he said backstage at the UFC Apex. Despite his expectation of always winning, however, the feeling Tuesday was “absolutely unreal. I play a lot of video games. It’s like playing a video game, you know, like you hit the next level, ‘Yeah, what’s next?’ I get to see it now, and it’s amazing. I’m ecstatic. I can’t believe it.”

“You get nervous, you get anxious, but there’s nothing like that feeling after winning the fight,” Camur added.

On his opponent, Fabio Cherant, who certainly had his moments in the pair’s featured fight, “he did a lot of good things,” Camur admitted. “He was moving around a lot, throwing some shots that, a few came through. I ended up brushing them off, it’s alright, a fight’s a fight. I felt good about my performance. I thought he’d be coming in with his head down a bit, but it opened up since he’s a southpaw. A little confident on his left hand. And that knee landed on him. It was an amazing feeling.”

Camur certainly appeared to be hurt in the fight, prior to the knee turning things around. “It looked bad, right? But it wasn’t as bad as it looked. Adrenaline definitely was kicking in when I was in there. So brush it off. It was a good shot, but nothing crazy. I’ve been through it before I know how to bring myself back down, go back to the basics and get that W.”

What many will remember about Camur’s appearance on the Contender Series is Stipe Miocic calling Dana White to urge him to award his fighter a deal. “It was amazing. I didn’t expect it from him, but I wouldn’t put it past him,” Camur said about the call. “He’s an amazing guy, he’s helped me so much. The call, I can only imagine how it went. I wish I could hear it.”

So, will he be sticking around light heavyweight moving forward, or moving down to middleweight? On that subject, Camur told Cageside Press that “I’m 23, I still have growing to do. I think I’m a good size. I walk around 220, 225. I think my speed is good, I have power. I think I’m a good look at the 205 division. You never know what the future’s going to bring, but as of right now, I’m planning on sticking around [light heavyweight]” 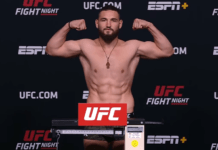 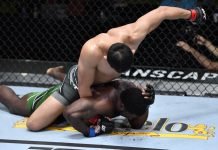