After winning his way into the UFC on this week’s Contender Series installment, Rodrigo Nascimento is ready to go again in just a matter of weeks should the promotion call.

Las Vegas, NV — One of the key benefits of Dana White’s Contender Series has been its ability to bolster the ranks of the heavyweight division, generally one of the thinnest in the sport. That continued this week, as Rodrigo Nascimento earned himself a UFC contract thanks to his submission finish of Michal Martínek. The arm-triangle choke saw Nascimento improve to 7-0 as a pro, while simultaneously serving up the first defeat of Martinek’s career.

Post-fight, the Brazilian heavyweight spoke to reporters including Cageside Press, saying that “I feel blessed and happy, because I’m training hard for jiu-jitsu.”

Speaking via translator, he added “today everything worked, I used my jiu-jitsu for submitting my opponent. I respect my opponent, but definitely I have good jiu-jitsu, and I believe in my team.”

After the submission, sitting in the back, Nascimento was confident he’d landed a UFC deal. His thought process was “definitely, I’m sure. I’m inside the UFC right now because it’s a great fight, it’s a clean fight.” So he knew he had a good chance. “Thank you for the UFC,” he added.

As for his UFC debut, “I want a big fight in my country, in Brazil, definitely. But I’m so happy here, it doesn’t matter who, it doesn’t matter where,” Nascimento said. The Brazilian trains both in the U.S., and in his home country. “I’m ready. But for me it’s better fighting here in USA because I love this country and respect [it]. And I would like to show my gratitude to the UFC.” 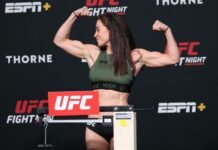 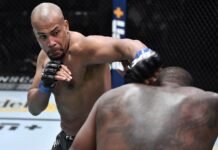