Flyweight isn’t dead just yet in the UFC, as Mark De La Rosa and Kai Kara-France have reportedly been booked for a 125lb tilt at UFC Shenzhen next month.

The UFC’s return trip to China, and debut in the city of Shenzhen, continues to take shape. On Tuesday, MMA Junkie was first to report that a flyweight scrap had been scheduled for the UFC Shenzhen card. That fight will see Mark De La Rosa return to the weight class, after competing most recently at bantamweight. He’ll face Kai Kara-France, who has competed exclusively at flyweight in the UFC, at the event.

Kara-France (19-7) has won both his fights under the UFC banner to date. On a seven fight win streak overall, he’s coming off a win over Raulian Paiva at UFC 234 in February.

De La Rosa (11-2), whose wife Montana also competes in the UFC, is batting .500 so far in his UFC career. His lone flyweight bout came under the UFC banner, a win against Elias Garcia last July. However, like many others, ‘Bumblebee’ headed to bantamweight when rumors began to swirl about the 125lb division’s demise.

His last fight, at 135lbs, ended in a loss to Alex Perez at UFC Philadelphia (UFC on ESPN 2) this past March.

It seems, however, that flyweight has some life in it still. And on a card in China, flyweight fights should have no trouble connecting, as the Asian audience has traditionally been more receptive to the lower weight classes. 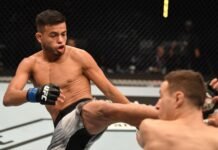 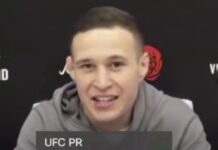