After being told she was a big underdog against Rena Kubota ahead of Bellator 222, Lindsey VanZandt was glad she could prove the naysayers wrong.

New York, NY — While Darrion Caldwell vs. Kyoji Horiguchi was the crossover fight everyone was talking about at Bellator 222, there was another RIZIN vs. Bellator bout on the card. That came when Lindsey VanZandt took on Rena Kubota, in the fight where Rena was clearly the better known fighter, and the heavy favorite heading in. The catchweight bout (112lbs) had atomweight VanZandt give up some size — but she still got the job done.

“This is a normal fight. This is nothing. This is like any other fight.” That’s what VanZandt told herself heading into the event at New York’s Madison Square Garden, she told reporters including Cageside Press post-fight. “Once the fight’s over, I’ll take it all in.” She was still in a state of disbelief following the win, if just a little.

The finish came early, by rear-naked choke, and that certainly had the New York state native excited. “First submission!” she exclaimed. Despite having trained a lot of BJJ, “I haven’t got a submission yet, so my Brazilian Jiu-jitsu coach is really excited.”

It was hard for VanZandt (6-1), now 2-0 in Bellator, to calm the butterflies ahead of a big fight in Madison Square Garden. “I was definitely very very nervous coming in here. But it felt just like anywhere else, maybe a little bit more than usual, but I was like, ‘can’t believe this is happening.’ I just kept telling myself to be in the moment.”

She also knew that opponent Rena “was really good. Her background is unbelievable.” And VanZandt was well aware of where her advantage was. “I knew she was going to have me in the standup department, which she definitely did. I got hit a couple of times. It didn’t really phase me, but I knew my biggest strength would be on the ground, so I was like ‘I’ve got to take her down pretty quickly.'”

Patience, you got this” VanZandt told herself while hunting for the finish. Asked whether she said anything to her opponent when it was all over, VanZandt told media members that “I didn’t know what to say, because I didn’t know if she was going to understand me or not” she said, adding “I’m still respectful, I was like ‘thank you.’ She’s really sweet. Very sweet.”

On whether this potential star-making turn might be her big break, VanZandt said she thought it was. “I think so. I’m hoping so. I worked really hard. It was a big moment for me. Big win. Like I said her background is amazing, it was very nerve wracking going into this fight. Especially everybody telling me what an underdog I was. So I’m glad I could prove everybody wrong.”

In terms of odds, Tapology had the fight in Kubota’s favor, with 82% of the predictions siding with her. Never tell her the odds.

Looking ahead to what comes next, VanZandt said she’s “ready for whatever. I’m always ready. Especially if it’s at home.” Injury free, she’s open to “Invicta, Bellator, anybody wants me, you got it. But Bellator I love you, because I’m here right now.”

Ideally, however, she’d like to fight at her natural weight class of atomweight. She’s definitely a 105’er. “This is a catchweight. I walk around at 112. So I didn’t cut weight at all. She was a lot bigger than me in there.” She did, however, suggest she’d be willing to fight up a little again. “It depends on the fight. It has to be a good fight for me. This was a good match-up for me, because she was more of a stand-up fighter and I knew I had an advantage on the ground. So yeah if there’s a good match-up then maybe.”

Watch the full post-fight press scrum with Lindsey VanZandt from Bellator 222 above! 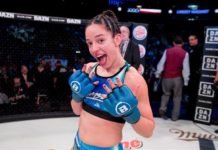 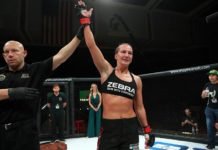