At 46, Israel’s Haim Gozali isn’t ready to call it a career just yet.

New York, NY — Much has been made of Haim Gozali’s age. The forty-six year old might be getting up there in years, however, but he continues to execute in the cage. Friday night at Bellator 222, he picked up his third straight win, adding to two victories (in a single night) he captured outside the promotion back in December.

The Bellator win, however, is something special, he told media outlets including Cageside Press following his submission of Gustavo Wurlitzer Friday. “It’s too much. To win in Madison Square Garden, to me, it’s too much. At my age, I — I’m old. To me, it’s great.”

The age question leads, frequently, to the retirement question. Gozali made his pro debut in 1998, against future UFC champion Carlos Newton. In 2006, he was submitted by Jacare Souza, leading to an extended break from the sport. He returned in 2012, splitting a pair of fights that year, then returned again in 2016, making his first Bellator appearance.

Which has led Gozali to be more active than ever before. “Every one, I’m saying ‘maybe this is the one,'” he said about a potential retirement. “But no, I’ll continue. I don’t feel old. I don’t feel the body. I feel good.” So the Israeli ‘Batman’ (his body is plastered with tattoos inspired by the character) will stick around a little longer, it seems.

Dedicating the win to a friend who had recently passed away from cancer, Gozali gave his thoughts on the fight. “That was my plan, to go to the ground, my back. Because I come from jiu-jitsu, I can fight on my back, I don’t care. Everything was good.” Though he admitted that “I don’t remember how I got to the ground, what happened over there.” He remembers working on the triangle, but “I couldn’t get the choke right, so I elbowed a little bit, elbow and some punches, and then the choke.” It was the triangle choke that sealed the deal.

The win came in a fight Gozali never expected to get. “Last time I was here [Madison Square Garden] I lost to Ryan Couture. So I never thought I’m going to get another chance to fight over here.” When he got the opportunity to fight in MSG again, his thinking was simple. “I have to win, you know? The first time, it was just to fight over here, but now it’s just to win over here.”

And he’ll keep on fighting for now. “I want to fight until my body’s going to quit, that’s for sure. And I’m producing also the Israeli [Bellator] shows,” he added. “[In] Israel it’s a big show, it’s like 9,000 people in every show.  It’s crazy over there. It’s become like soccer, basketball, it’s become like the top sport in Israel. It’s like the only sport in Israel that brings 9,000 people to an arena.”

Watch the full post-fight press scrum with Haim Gozali from Bellator 222 above! 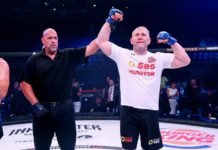