Emiliano Sordi ended PFL 3 2019 with some fireworks, battering Vinny Magalhaes on the feet to force a second-round stoppage.

Emiliano Sordi was the fifth seed in last year’s PFL tournament after earning a first-round stoppage in his lone regular-season appearance. Sordi was then knocked out in the first round of the tournament. The Argentinian has made appearances in both Bellator and Dana White’s Tuesday Night Contender Series with a 17-8 record that includes 12 knockouts and five submissions.

Vinny Magalhaes, an ADCC grappling world champion, is coming off a brilliant 2018 season in PFL. Magalhaes earned the maximum 12 points with a first-round KO and a first-round submission, then reached the finals two first-round kimuras on the same night. His run was stopped by champion and current broadcaster Sean O’Connell. Magalhaes was a finalist on the eighth season of The Ultimate Fighter, going 3-0 on the show before losing to Ryan Bader in the finals. Overall, the Brazilian went 1-4 across two UFC stints, winning the M-1 light heavyweight title in between.

Emiliano Sordi deflected a head kick, then knocked down Vinny Magalhaes with a right hand. Sordi, of course, couldn’t engage with his grounded opponent due to the Brazilian’s mastery of jiu-jitsu. Magalhaes shot for a takedown, took some punishment, then slammed Sordi down. Impressively, Sordi returned to his feet, and swept Magalhaes when he attempted another takedown. Sordi was firing heavy combinations that Magalhaes was trying to answer, but there was just too much coming his way. The Argentian was simply overwhelming Magalhaes on the feet. Magalhaes did somehow survive the punishment, making it to the second round.

BIG knockdown by @emilianosordi in the opening frame! Round 2 is underway on @ESPN+. #PFL3 https://t.co/m7CFd6bsXK pic.twitter.com/A3ZcwYhZof

Magalhaes threw a superman punch, but was simply thrown aside by Sordi. Magalhaes found his back to the fence again, taking abuse from Sordi. He shot for a desperation takedown but Sordi brushed him off like an insect. Emiliano Sordi hit Magalhaes with a clean five-punch combination, and Dan Miragliotta had seen enough, stopping the fight on the feet.

Emiliano Sordi def. Vinny Magalhaes by TKO (Punches) in Round 2 (2:45) 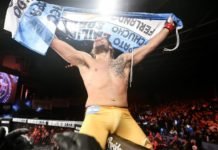 PFL 2: Emiliano Sordi Plans on Another Finish Against Chris Camozzi