Lost in all of the strawweight madness at Phoenix Rising, Invicta FC 35 was announced and is set for June 7 in Kansas City.

Invicta FC had one of the best events of the year last night. Invicta Phoenix Rising featured a one-night tournament reminiscent of UFC 1, or PRIDE. It was a strawweight tournament that featured some of Invicta’s mainstays, as well as former UFC talent. The winner of that tournament was Brianna “The Bull” Van Buren, and lost in the action-filled night, was Invicta announcing their next event.

On the Invicta Phoenix Rising post-show, Laura Sanko and Jimmy Smith announced the next Invicta show, which is held surprisingly soon. On June 7, the Invicta cage will return to Memorial Hall in Kansas City for Invicta FC 35. The card itself will be headlined by a rematch between DeAnna Bennett and Karina Rodriguez in the finals of the four-woman Invicta FC Flyweight Tournament. The two previously met in March 2018, where Bennett won a close bout via split decision.

The winner of the bout will likely fight newly crowned champion Vanessa Porto, who won the flyweight championship at Invicta FC 34. She won the title via technical decision, defeating former UFC fighter Pearl Gonzalez after an eye-poke rendered Porto unable to continue in the fourth round.

As of now, that is the only fight announced for the card. However, there is sure to be more announced very shortly, as the card is only four weeks away. Stay tuned to Cageside Press for all updates relating to the card. Invicta FC 35 will air live on UFC Fight Pass. 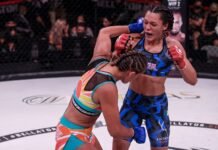 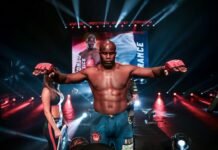