Invicta FC’s Phoenix Rising event takes place next month. In a press release this morning, they announced plenty about the one-night tournament card.

When Invicta FC announced a one-night strawweight tournament for May 4, there were many questions surrounding the card. We got the answers this morning as Invicta released a press release regarding the first tournament. Invicta announced the matchups, and that the winner of the one-night tournament would be crowned the new Invicta strawweight champion, due to Virna Jandiroba vacating the title to join the UFC.

The two reserve bouts will be one-round and be considered exhibition fights. However, should any of the fighters be forced in as injury replacements in the tournament, the fights will count on the fighter’s professional record. In the first reserve match-up, former title challenger Amber Brown (7-5) will face off with India’s Manjit Kolekar (11-2). The other pairing features Invicta newcomers as Canada’s Alyssa Krahn (5-2) meets Texan fighter Itzel Esquivel (4-2). 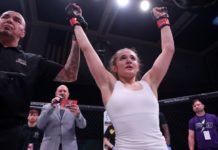