This week’s MMA Prospect Report has a number of solid female prospects worth keeping an eye on, competing at Invicta FC 38.

While the PFL is in action Thursday night (Happy Halloween!), Invicta might just have the best batch of prospects this week. So let’s get right to the Weekly MMA Prospect Report!

Goltsov has beaten a string of well-known fighters with too many to name. He is good everywhere and dominates fights. Goltsov has a laid-back style where he can work a precise and impactful jab for as long as he pleases, but then can switch it up and launch a head kick out of nowhere. Goltsov is a multiple-time Combat Sambo champion and placed first at this year’s Euros. Goltsov is the finished product and is only getting better and better. He’s arguably the best heavyweight prospect out there. He fights Satoshi Ishii (22-9-1).

Tobin is a high-level jiu-jitsu practitioner with 15 of his 16 wins via submission. Tobin has a very strong and active submission attack and is very diverse as he has finished with a crucifixion armbar, bicep slicer, rear-naked choke, armbar, triangle, and a toehold. Tobin is considered one-dimensional as on the feet he does need a lot of work. He does do a good job at closing the distance and his wrestling is improving but once he’s on the mat he is right at home. He fights Diego Pereira (5-3).

Porto has fought some of the best women in MMA including a loss to Cris Cyborg and Amanda Nunes but holds wins over Germaine de Randamie, Tonya Evinger, Jennifer Maia, Kalindra Faria, Roxanne Modafferi, and many more. Porto is well-rounded but boasts eleven submissions so the mat is where she wants the fight. She fights Karina Rodriguez (8-3).

Her striking is impressive throwing combinations with constant one-twos; she also has good kickboxing. Her wrestling needs work but her ground and pound can be fight-ending. Her only career losses are to UFC fighters Alexa Grasso and Poliana Botelho, both currently in the promotion, and UFC alum DeAnna Bennett, who she would beat in a rematch. Rodriguez has steadily improved over time into a good prospect. She fights Vanessa Porto (21-8).

Murata, a prospect out of Japan, was a former 2011 Junior Wrestling World Champion. Her wrestling in MMA is excellent as her timing and her ability to explode to finish her entries are very well done. Murata has some solid chain wrestling. If her initial shot doesn’t get her opponent down, she can adjust and still land the takedown. She also has some nice judo that she utilizes from time to time. In terms of her skill on the feet, she is decent and getting better, but still a much better grappler. Murata is an excellent positional grappler with active ground-and-pound. She can also fight at a high pace for a solid three rounds. She fights Emily Ducote (8-5) who is a good test.

Martin was last seen on the Contender Series this past Summer. Although she didn’t earn a contract many thought she had done enough. Martin is a primary wrestler with an excellent work ethic. Her ground and pound is stellar once she gets into those dominant positions. Not much on the feet but her pressure is a fight changer. She fights Cynthia Arceo (5-1-1).

Raposo is only 2-0 as a pro but went 6-0 as an amateur. Raposo hasn’t been fighting the best of competition, but has performed as expected. At only 21-years-old, this youngster has a bright future. His wrestling is all-around excellent from his timing and execution. Good luck finding a takedown attempt he hasn’t competed. The job he does on the mat is fantastic work as well. Raposo has some dominant grappling and superior cardio. He fights Zachary Burhans (3-3). 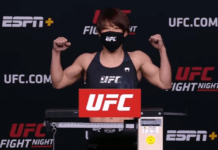 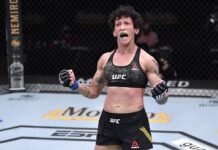