Bellator has proven adept at signing top prospects in MMA, and this Friday’s Bellator 259 features a stacked undercard full of up-and-comers. That and more in this week’s prospect report!

After a pair of consecutive losses in 2016, Jablonski has won his next six fights. Of the footage available he’s a wrestler with an overhand. His ability to drive in on the hips is very strong. Once he closes the distance he grabs a leg or both and just powers guys down. Jablonski has solid positional grappling and really strong control. On feet outside of having some power he struggles. His striking defense needs a lot of work. Overall I’m not fully sold but he’s worth a watch. Jablonski fights Alan Langer (11-7).

Zappitella started in wrestling before transitioning later into MMA. After a 2-2 amateur career, she has an impressive 8-2 record now as a pro. She stands at 4″11″ but has made up for that with her constant pressure getting into the clinch and fighting her fight. On the feet, she has some power in her overhands but she may struggle at range if she can’t close the distance. She is a fantastic wrestler who has been very impressive on top with her active movement and transitions. She defends her title against Jéssica Delboni (10-2)

Vanderford is a really strong wrestler who was a national amateur wrestling champion. He has excellent chain wrestling and once on top, he is very dominant. He doesn’t have much on the feet but he is growing and he does hold a lot of power in his hands. Vanderford is solid once he gets on top with heavy top control and heavy ground and pound. He fights Fabian Edwards (9-1).

Not long ago, Mendonca was on a three-fight skid. Now he’s won his last five fights. He just had a Fight of the Year performance against Batsumberel Dagvadorj in a crazy war to win the LFA title. Wins against Dagvadorj, Bobby Lee, Devin Smyth, and Kassius Kayne all look good on his record. Mendonca is a Muay Thai practitioner that has fallen in love with Thai plum knees, which he’s very good at using. Throwing from the outside with long strikes and he likes to throw that spinning kick to the midsection. He does need work with his takedown defense but off his back he is dangerous. He’s really turned the tide in his career. Mendonca fights Jaleel Willis (14-2).

Jaleel Willis is quite athletic and a top-notch wrestler. On top, he has the control, the transitions, and the ground-and-pound to excel. Willis is everything you want in a fighter, especially in terms of wrestling. On the feet, he does hold a lot of power in his hands. Willis still has some things to learn but is a bright prospect. He fights Maycon Mendonça (11-4).

Edwards is only 4-0 as a professional but went 3-0 as an amateur as well. Edwards is one of the hottest prospects today coming out of Jackson-Wink MMA and is a sparring partner of former UFC light heavyweight champion Jon Jones. A young kid but he has the attributes to go really far in this sport. Edwards has some sick Thai clinch work with nice knees and elbows. He lands often stepping in with strikes and finishes in the clinch with excellent work. Also mixing in a few takedowns while showing solid cardio. He’s also already gone three rounds and looked really good. He fights Ben Parrish (4-1).

After going 6-0 as an amateur Neal is currently 5-0 as a pro. Neal is a wrestler first. If he doesn’t finish the fight early he can dominate the fight with relentless takedowns. Once he gets his hands clasped he will dump you on your back in a big way. Neal stays busy with ground and pound and can throw at the same pace and pick it up later in the later rounds even. He fights Tyree Fortune (5-0).

Son of longtime fighter Haim Gozali, Aviv Gozali has looked fantastic in his short career despite being so young. All his wins have come by submission in the first round. Gozali is an aggressive grappler who excels in that department. There are questions about his striking but his jiu-jitsu is high-level. He fights Sean Felton (5-2-1).

From losing her pro debut to winning her next four McCourt is a good prospect. She even has a win over UFC’s Manon Fiorot. Not much on the feet as her full intention is to get the fight to the mat. To get it to the mat McCourt has some wonderful judo she uses. Her grappling is good and getting into the mount and unloading ground and pound is something she does well. McCourt will fight Janay Harding (6-4).

Shabliy, although violent, is an efficient counter fighter, reacting well to his opponents’ advances. His takedowns generally happen when his opponents try a takedown themselves, but he overpowers and throws them to the mat. On the feet, he is calm but he brings the heat when needed, and if he catches his competition then he will try his best to end the fight, whether that be with his strikes or knees. Shabliy is an intelligent fighter that makes very few mistakes. He’s one of the best prospects out of Russia. He fights Alfie Davis (14-3).

Davis’ ground game has improved greatly throughout his career. He is dangerous off his back with submissions or just simply sweeping his opponent. Being on his back at times, he has never been in trouble and he always works his way back to his feet very quickly. On the feet, he is a treat to watch, as everything is set up with his sublime kickboxing. His kickboxing is very dynamic, always throwing a variety of kicks and attacks with every limb of the body, always feinting and switching stances, showing excellent footwork with crazy speed. Davis doesn’t usually box enough, but his kickboxing, staying on the outside and keeping his opponent guessing, is good enough. He fights Alexander Shabliy (19-3).

Sabatello, with an impressive 9-1 record in MMA, made his name in wrestling. He’s a three-time NCAA Championships qualifier and a two-time 141-pound Big Ten Championship winner. He’s an insanely good wrestler with frantic forward pressure, and he has a high pace he puts on until the finish or a decision. He now a new Bellator fighter and I expect him to do well. He fights Brett Johns (17-2).

Fremd is a product out of Factory X and someone that has a bright future. The only thing that worries me is his suspect cardio and maybe his takedown defense. At least offensively he’s finding finishes striking and on the mat. Fremd throws good output with tons of leg kicks and looping hooks in combinations. He’s also a strong wrestler and is a threat with chokes and ground and pound. He thrives in scrambles and is a fast big man. He has a good flow to his output and overall is someone that may be a breakout star in 2021. He fights Gregory Rodrigues (7-1) for the LFA title.

Catch our interview with Josh Fremd ahead of this one.

Climaco is a scrapper 125er that is a treat to watch. On the feet, he’s like a firecracker that is firing on all cylinders. He throws a lot of output and from all angles. Climaco hits hard, he’s quick, and throws in volume very well. The young 22-year-old is already very well rounded so the wrestling and ground game is there. For a young flyweight prospect, he’s oozing with potential. He fights Rodney Kealohi (5-1).

Carpenter was the USA junior National Muay Thai champion, a four-time Muay Thai National Champion, a junior Golden Gloves Boxing Champion, World junior Grappling and Pankration medalist, and an IBJJF World Champion in gi and no-gi. As expected with his experience across an array of sports, Carpenter puts it all together in MMA. He doesn’t do anything significantly better than the other, as he’s as well-rounded as they come for such a young fighter. Carpenter on the feet is a technical player, fighting behind forward pressure and leg kicks being highlighted. He mixes it up perfectly, lunging forward with knees and strikes,  takes out the legs, and goes up top for the kill. Carpenter makes you think he is so comfortable striking and mixing it up, you might even forget about the takedown threat. He fights Nick Clem (3-1).

Peterson came into his MMA career with a background as a wrestler. He was a high school Minnesota State champion and an NJCAA National champion at Iowa Central. Peterson has had no issue using his wrestling and land ground and pound to send the ref in. Outside of that, he does have a one-punch knockout win. It’s still hard to tell how good he really is. Peterson fights Richard Foster (5-4).

Vartanyan has been fighting at a high level in Russia for quite some time. His losses have come primarily to good competition, and he’s also beat some quality opponents as well. He holds wins over Magomedrasul Khasbulaev, Sergey Khandozhko, Alexander Shabliy, and Alexander Sarnavskiy. Vartanyan is an excellent pocket striker, counter striker, solid wrestler, and is tough as nails. He fights Michel Silva (22-8-1).

Rayomba is a bright young prospect out of Germany who I’m very impressed with. There isn’t a lot of footage available so there isn’t much to go off of. From what I picked up he’s a really good intelligent striker. Rayomba fights at his preferred range landing nice straight punches. He’s really good at slipping punches and returning. He mixes it up to the body head and switches up his tempo mid-combination. Still, a lot needs to be seen but the skill is there. He fights Florim Zendeli (3-0).

Kerim Engizek has quietly flown under the radar but arguably has the best resume of all German prospects. He’s the current GMC welterweight champion who has defended his title three times. His last loss was in 2014 and he’s currently on an eight-fight win streak. On the feet, he a good counter striker slipping and coming over the top with his right hand. Engizek isn’t stingy as he goes to the body quite often mixing it up the way fighters should. He does have a ground game as well and while it is fine, he’s much better striking. He fights Milanko Puranovic (4-6). 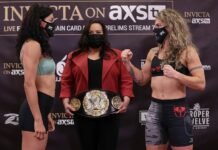