After being unable to pick up a win in his first two UFC fights, Matt Frevola secures his first Octagon win with a decision over fellow DWTNCS alumni, Jalin Turner.

Matt Frevola is a Long Island native who fought in both WSOF and Titan FC before getting a shot at Dana White’s Tuesday Night Contender Series in 2017. Frevola won by second-round submission, earning him a contract with the UFC. After a first-round knockout loss in his promotional debut, Frevola took Lando Vannata to a draw in November.

Jailin Turner was 6-3 with all stoppages and a win in Bellator when he was selected for last year’s Dana White’s Tuesday Night Contender Series. Turner won by first-round stoppage on the show, resulting in a UFC contract. After falling to Vicente Luque in his promotional debut, Turner knocked out Callan Potter in under a minute in February.

Here is the play by play

Frevola steps into the pocket to throw a haymaker but is smashed with a knee to the face. He seemed rocked but takes the “Tarantula” down to the canvas. They scramble and Frevola takes his back. He hits the Jason Parillo student with two hard left hands and looks for a rear naked choke. Turner hides his chin. Frevola hits him with two shots but falls off allowing Turner to his feet. Turner smashes Frevola with a straight left hand.

He wobbles Frevola again but is taken down by Frevola. The Gracie Tampa South team member goes for a top side guillotine, it looks tight. Turner remains calm and gets free and to his feet. The Tarantula stuffs a takedown but is hit with two left hooks as the round comes to an end.

Cageside Press scored the round 10-9 for Frevola.

Frevola opens the action by shooting deep into Turner’s legs but can’t get the larger fighter down. Back on the feet, Frevola kicks the body and then takes Turner down, who pops right back up.

“Steamrolla” slides into the pocket to hit a combo. He jabs Turner and moves back out of range. The pace has slowed greatly. He shoots in on a takedown but can’t get it again. Turner marches forward and hits Frevola with two clean right hands.

Turner times a knee and then looks for a guillotine. Frevola defends the submission but looses and grabs a single leg. He pulls Team RVCA member to the canvas and works from Turner’s half guard. Turner scrambles but gets caught with a guillotine. He pops his head out but Frevola throws up an illegal upkick. It hits Turner in the face.

Referee, Marc Goddard stops the action but doesn’t take a point from Frevola because he states the upkick was grazing and unintentional.

They restart with only three seconds and the round ends.

Cageside Press scored the round 10-9 for Frevola.

Frevola tags Turner with a right hand to start the round. Turner responds with a clean straight left. He follows up with a kick to the body and a left hand. He is stalking Frevola as the pace has slowed greatly.

Frevola steps into the pocket and is hit with a three punch combination. He backs up and is hit again with two more shots. Turner is landing his shot but not being aggressive enough.

Frevola times a beautiful double and takes Turner to the mat. The Tarantula throws up a desperation triangle and Frevola easily slides his arm free. He uses the opening to move to side mount. Turner is able to scramble to his feet and hit Frevola with a big knee. He follows with two teep kicks to the gut. Turner misses a flying knee.

Frevola hits Turner with a massive right hand but is crushed with a body shot. The fight ends with Frevola slamming Turner to the canvas.

Cageside Press scored the round 10-9 for Turner but the fight 29-28 for Frevola. 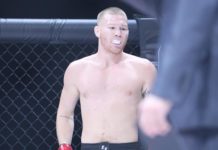 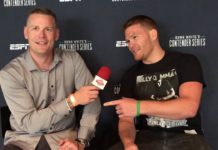 New Contract in Hand, Matt Frevola Looking to Get on UFC Boston or Melbourne Card