Years earlier, Ovince Saint Preux had submitted Nikita Krylov via a Von Flue Choke. On Saturday at UFC 236, Krylov evened the score with a submission of his own.

Ovince Saint Preux was a Division 1 college football player for the University of Tennessee before kicking off his MMA career. A 4-0 run for Strikeforce Challengers earned him a shot at big Strikeforce, where he went 1-1 with a loss to current Bellator champion Gegard Mousasi. OSP was 7-2 with five stoppages in the UFC before getting an interim title fight against Jon Jones. Saint Preux is 4-2 since then with three submissions (two of which were the rare Von Flue choke).

Nikita Krylov was one of the top prospects in the light heavyweight division, with a 6-2 record in the UFC when he was matched up with fellow top prospect Misha Cirkunov. Cirkunov won their fight by submission, and Krylov left the promotion to fight in Russia. The 27-year-old was 4-0, stopping each opponent again. Krylov re-entered the Octagon last September, falling to Jan Blachowicz by submission.

The fight was less than fifteen seconds old when the ref gave the first warning for open fingers. Krylov had his striking going, but Saint Preux quickly got the fight to the ground. He couldn’t keep it there, however, as Krylov worked back up and moved into position for a guillotine. Only to be taken down again. Right back up, right back into another choke. OSP, however, broke free soon enough. He scored a trip takedown, but again, could not keep Krylov there.

The next sequence, however, saw OSP keep Krylov down a little longer, working in a few strikes. Krylov, who had captured the FNG light heavyweight championship during his time away from the UFC, was looking a tad winded by the end of the first round.

Nikita Krylov opened the second round landing upstairs on Saint Preux with a punch. OSP shot in, driving ‘The Miner’ into the cage; Krylov dropped a few elbows in answer. Reversing, Krylov then took Saint Preux down, and moved to mount. OSP gave up the back trying to escape. A couple of elbows later, Krylov had an arm under the neck of Saint Preux. With nowhere to go, making audible grunts due to the discomfort of the choke, he tapped, and Nikita Krylov had his revenge, submitting Ovince Saint Preux — who had submitted him years earlier at UFC 171. 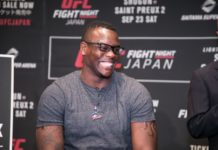 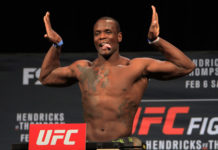 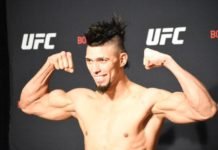