After finding herself knocked down in the first and on her heels, Maycee Barber regrouped to finish off JJ Aldrich in the second round at UFC Nashville.

Top prospect Maycee Barber made her flyweight debut Saturday at UFC Nashville, after a reportedly torturous effort to make the strawweight division limit. Welcoming Barber to 125lbs was J.J. Aldrich, herself making her UFC debut as a flyweight (Aldrich had competed in the weight class outside the promotion).

Barber, known as ‘The Future’ and very much hoped to be part of the UFC’s future as a potential star, had struggled both in and out of the organization on trips to the scales. That was a thing of the past in Nashville. What was a surprise was some early struggles, but Barber also showed she could overcome adversity.

Aldirch came right out and pressed the action, backing Maycee Barber up in the early going. Barber returned fire, but it was an early victory for Aldirch, who then dropped Barber with a straight punch! Barber was on her back, but Aldrich failed to engage, allowed Barber to recover and get back up. However on the feet, Aldrich continued to push the fight, landing a couple of solid blows that stood Barber up. Barber, for her part, was struggling to land, and continued to eat right hands. A head kick by Barber fanned, with Aldrich out of range, seconds later, JJ landed yet another right hand on her opponent. Barber was knocked off balance and onto her back late in the round, but they would head to a second.

A demoralizing round for Maycee Barber, who would now have to show she could overcome some early adversity. She opened the second firing some kicks to the leg and body, but again, it was Aldrich pressing forward, landing this time with a left. Barber was looking worse for the wear, but initiated a clinch. The second round, as it unfolded, became a different story however. Barber landed a left, rocking Aldrich and backing her up. Barber chased, firing a few more strikes and Aldrich covered up and escaped. Barber stayed on her, landing a number of hooks as Aldrich covered up, and as she doubled over, a knee from Barber connected to seal the deal.

More than just the win, Barber gained some key experience in the bout, showing she could battle back after her early struggles. 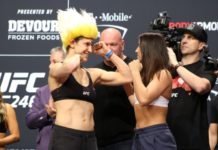 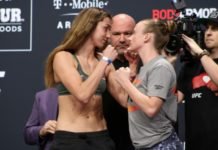 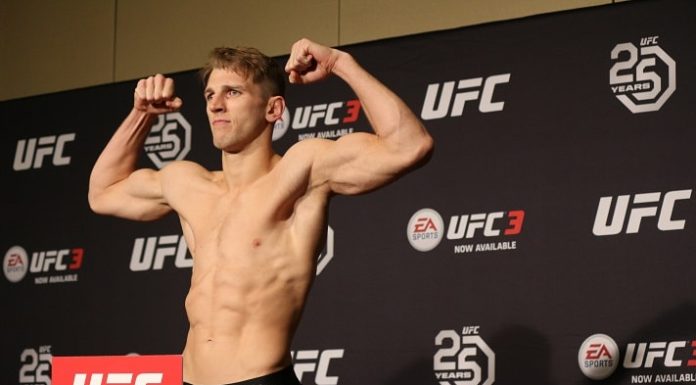