Bryce Mitchell came close to finishing, but ultimately went the distance with Bobby Moffett on Saturday night at UFC Nashville.

Two fighters both making their sophomore appearance at UFC Nashville, undefeated Bryce Mitchell stepped into the octagon to face off with Bobby Moffett. Moffett entered the night on a four fight win streak, three of those having come by way of Brabo/D’Arce Choke.

TUF alum Mitchell was probably best known for a horrifying power tool-scrotum injury prior to the fight. That kept him out of action since July. But he certainly put on a showing on Saturday.

Mitchell came out aggressive and took center. He followed with a hard high kick that was blocked by Moffett. Moffett looked to get his timing down down but Mitchell fired a punch down the middle that stunned Moffet and dropped him. Mitchell chased after and looked for the choke. Moffatt worked to escape but Mitchell stuck to him, until Moffett spun on top. Mitchell kept working and locked in a triangle then transitioned to an armbar. Moffett defended well and was able to escape again and get back to his feet. Mitchell looked for another take down attempt but was stuffed. Moffett then landed a nice right but Mitchell walked through it and looked for the take down. The two found themselves against the fence and looked for position as the round came to a close.

Round two opened with Moffett looking to be aggressive and shooting the take down. Mitchell defended well but Moffett kept working and landed shots before he briefly took the back of Mitchell. Mitchell scrambled and got back to his feet; Moffet looked to keep the aggression up and pressed forward as Mitchell fired back. Moffet continued to press, got the body lock and put Mitchell on the mat. Moffet worked from side control and locked in a choke. Mitchell defended the position well and worked his way on top, escaped and took the back of Moffett then looked for another armbar. The two scrambled and Moffett ended back on top as the round ended.

Moffett again came out quick but Mitchell fired back and pushed Moffett back for a moment before he continued to press forward and secure the take down. Moffett worked from top until Mitchell attacked the arm again and looked for the arm-bar from the bottom. Moffett escaped and worked from top for a moment but Mitchell exploded and escaped back to his feet. Moffett continued to press and the two ended up on the mat again with Moffett working from top. Mitchell looked to work from the bottom but Moffett tried for the choke again, and Mitchell exploded up one more and took Moffett’s back. He quickly locked in the choke but Moffett slipped out. Mitchell continued to look for the choke but Moffett was able to get back to his feet just before the round ended. A close one, though Mitchell had some chances in the submission department.

UFC DC: Who’s Next In Line 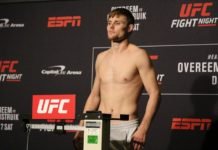