Get one of your first looks at Mighty Mouse, Eddie Alvarez, and Sage Northcutt working out under the ONE Championship banner.

Los Angeles, CA — In case you’ve forgotten, ONE Championship made a huge splash in the free agent pool in late 2018. Signing all-time flyweight great Demetrious Johnson (better known as Mighty Mouse), former UFC lightweight champ Eddie Alvarez, and top prospect Sage Northcutt, the promotion seemed destined for big things in 2019. And it very well may be, once A New Era in March goes down.

Ahead of the trio’s debuts, ONE Championship hosted an open workout in Los Angeles on Tuesday, highlighting the moves of their newest stars. Mighty Mouse, Northcutt, and Alvarez all worked out, while Rich Franklin and Miesha Tate, who serve as executives for the promotion, were also on hand.

Check out the Mighty Mouse workout above, and both Alvarez and Northcutt working out below.

The full card to date for ONE Championship: A New Era is as follows: 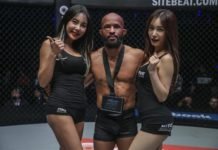 Demetrious Johnson on ONE Championship’s Talent Pool: “They’re All Monsters”